Is our work of building a better society a private matter, best directed, and funded by each of us who can spare a dime or a Billion dollars? Or, in a democratic society, must the lead be taken by a government that is accountable to all of us?  In an age of growing wealth disparity, a gap that raises important questions about how our economy is structured,  and of heated political debate about the role and effectiveness of government, the headlines that surround Mackenzie Scott’s philanthropy makes these questions more than theoretical exercises.

Her willingness to give away so much of her huge fortune draws attention. A recent announcement of a third set of Scott grants, totaling $2.7 billion to 286 nonprofits, brings her total giving since 2019 to more than $8 billion dollars supporting 786 nonprofit organizations. In and of itself, that level of generosity seems to validate the continuing importance of private giving.

Beyond her largesse, her giving philosophy also draws our attention. She has chosen not to build an organizational superstructure that marks the current philanthropic landscape; one shaped by the presence of large Foundations and Public Charities. She does not invite requests for funding nor ask for organizations to manage complex and expensive application procedures. She does not even have a website to tell the world the story of the amazing work she is doing with her philanthropy.

Rather, she quietly goes about the work of deciding how her money might be best spent and which organizations feel right to her, her husband, and the others she chooses to confer with. In her own words here is how she decides which organization she will support and what issues she wants to focus upon as she gives a way a portion of her huge ($60 billion) personal fortune.  “I want to de-emphasize privileged voices and cede focus to others…Putting large donors at the center of stories on social progress is a distortion of their role. Me, Dan, a constellation of researchers and administrators and advisors — we are all attempting to give away a fortune that was enabled by systems in need of change. Over 700 million people globally still live in extreme poverty. To find solutions, we all benefit from on-the-ground insights and diverse engagement…” She values those doing the work, she trusts their competence, and wants to give them the resources they need.

She approaches her giving with a clear view of the fragility of our political environment and the role of the voluntary sector in establishing a better society for all. “While political pendulums swing back and forth, redistributing, and re-concentrating wealth, we can choose to fund organizations with the potential to increase the impact of every dollar and hour donated by others. Social sector infrastructure organizations empower community leaders, support grassroots organizing and innovation, measure and evaluate what works, and disseminate information so that community leaders, elected officials, volunteers, employees, and donors at every level of income can make informed decisions about how to partner and invest. These organizations, which are themselves historically underfunded, also promote and facilitate service, which in turn inspires more people to serve.”

Chuck Collins, director of the Program on Inequality and the Common Good at the Institute for Policy Studies and frequent critic of the wealthy, recognizes MS Scott’s approach for its uniqueness and sees it as a model for other philanthropists to learn from. Posting on Common Dreams he wrote she was “putting to shame the other 650 U.S. billionaires who haven’t figure out comparable ways to boldly share.”

Is the answer to a struggling civil society, one starved of the resources it needs and the ills of poverty in the shadows of our new gilded age to be found in Scott’s wisdom? Should we be focusing energy on encouraging others to follow her lead and give up the aristocratic approach to giving that is too evident in many of her peers like Gates, Zuckerberg, and Powell?

With these questions in mind, it may be useful to turn to The Institute for Policy Studies’ newest look at our nation’s wealthiest families, Silver Spoon Oligarchs: How America’s 50 Largest Inherited-Wealth Dynasties Accelerate Inequality In 2020, America’s. These 50 families “together held $1.2 trillion in assets. By comparison, the bottom half of all U.S. households—an estimated 65 million families— shared a combined total wealth of just twice that, at $2.5 trillion.”  Moving beyond just these dynasties the picture does not change. According to data cited by Senator Elizabeth Warren (Politifact) “The 0.1% of top income earners own the same amount of wealth as the bottom 90% combined. That is, 200,000 wealthy families own as much as 110 million regular families in America. This points to significant inequality in America. 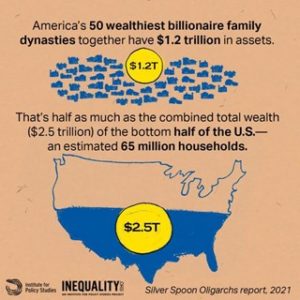 As unique as Ms Scott’s philanthropic approach is it will not change her privileged status, in fact has done little to diminish her standard of living nor does it point a way toward redressing the ills that concentrated wealth brings with it. Even after giving away $8 billion,  MSN Money, citing  Bloomberg’s Billionaires Index, noted that since June 2020, Scott’s fortune has increased by $1.31 billion overall.  CSI’s analysis found that this is par for the course if you are very wealthy: “dynastic family wealth grew ten times the rate of ordinary families.”

While Ms Scott may play the game of wealth differently, she still retains the power to make decisions about where and how her money will be spent. That is the problem. We remain at the whim of the wealthy to decide how they will use their money to buy influence and control.

As described by CPS, “wealthy families wield a great deal of political power and use it to further their interests….spend millions lobbying for favorable tax, labor, and trade policies…have corporate political action committees which give millions to candidates and campaigns…wield a great deal of philanthropic power…”  By giving to Foundations and Donor Advised Funds they can gain “significant tax deductions when they set up foundations and when they continue to donate to them, year after year. As trustees, they exercise considerable decision-making power over grants and staff pay.” They continue to control how and when money they have donated is spent.

With only their personal moral compass to guide them. They can choose to support, as Ms Scott has done,  organizations run by “people who have spent years successfully advancing humanitarian aims…” Or they can support organizations like VDARE which the Southern Poverty Law Center describes as a hate group. They can choose to give their money away with few strings or conditions, allowing those they support to control how best to direct their resources. Or they can use their donations to control the work of those who now depend on them. They can choose to pour their “charitable” efforts into the streams of dark money that now sway elections at all levels, adding political power to philanthropic heft.

Under current law and policy, all this influence, influence that grows as wealth grows, remains under personal and not public control. In choosing to neither limit the concentration of wealth and the way for individuals to utilize wealth to steer how society shapes itself through governmental and civic action, we are allowing an aristocracy to quietly, but strongly, control our lives and our futures.  Democracy itself is at risk.

Mackenzie Scott as an individual deserves to be admired. She and I would agree about so much. But that admiration, that agreement cannot keep us from recognizing that her power influence is a sign of the danger we are facing. Her voice is just one of millions.  Her voice, as noble as it sounds, drowns out others. Unchecked, Democracy is at risk.