Last week I questioned whether private philanthropy was able to handle the pressing societal challenges we face. A study commissioned by the Urban Institute that was published as July ended can shed some new light on this question.

Laura Wheaton, Linda  Giannarelli, and  Ilham Dehry, the researchers responsible for  “2021 Poverty Projections: Assessing the  Impact of  Benefits and  Stimulus  Measures “ set out to measure the impact of the dramatic investments that Federal and state governments have made to combat the negative economic impact of the ongoing pandemic. Their findings tell us that these investments made a dramatic positive impact on millions of lives and that only governments could undertake an effort of this scope and size.

Their findings are of particular interest in a moment when much of the special assistance that comprised the several rounds of emergency assistance is coming to an end and when Congress and the President are in active debate of what should come next.

Beginning in March 2020, the Federal Government began to invest heavily in programs designed to shore up and expand the economic safety net that could protect American households from the economic toll of COVID-19.  Specifically,  funding for new and expanded funding was distributed through existing and new programs:

Using the Census Bureau’s Supplemental Poverty Measure (SPM) as their yardstick, a measure that factors in a broad range of cash and non-cash supports along with living expenses,  the study found that there has been a dramatic reduction in poverty rates because of these programs. With the benefits provided across the nation  “the annual poverty rate projection for 2021, 7.7 percent, is well below the rate of 13.9 percent that we estimate for 2018 with the same methods.  The projected percentage of people in deep poverty in 2021 (that is, with family income less than half the poverty threshold) is 2.6 percent, compared with 4.2 percent in 2018.” 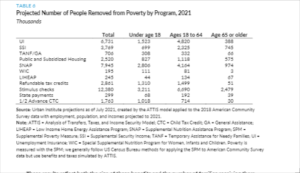 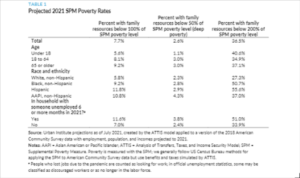 All in all, the researchers concluded that Government programs can make a real difference. “Our projections demonstrate that government benefits can reduce poverty well below traditional levels when substantial resources are devoted to that task. Policymakers who want to make some aspects of the higher level of support permanent will need to consider the appropriate levels and types of increased supports, the best ways to fund such efforts, and the potential macroeconomic implications of various choices…”

Their cost is large, well beyond even the wealthiest socially conscious philanthropist’s capability.

The human impact is even greater.

It is time to stop debating whether we can ever end poverty. We can if we choose to act.

Before us is a moral question, not one about our capabilities.

Do we care enough about the value of each life in our nation to make the difference we know we can make?

All the other issues that are raised to question building a government safety net that is strong and sufficient are just deflections. Yes, there will be some inefficiencies in the system. Yes, some people may cheat. Yes, some who do not need the help may get it. But these are issues on the fringe and not real reasons to turn away from t we must do.

Yes, each of us can donate to worthy causes but this too is a deflection. It makes us feel good but cannot replace a government-created, universal safety net.

We need to look ourselves directly in the mirror and know that this is about our care, concern, and commitment to each other. This is about acting on what we can do that will make a difference and being willing to make the sacrifices that it will take.