Standing behind Israel isn’t so simple these days. But is that any reason for those who stand with its policies of continued occupation and continued oppression of its Palestinian citizens and those living in the lands it occupies to smear those who speak out against this reality as evil perpetrators of anti-Semitism? That’s the question I asked myself once again as I read ADL’s recently published survey, ADL: Anti-Israel Activism on U.S. Campuses, 2021-2022.

The ADL is a century-old organization that was formed to “stop the defamation of the Jewish people and to secure justice and fair treatment to all.”  It has also become an increasingly vocal defender of Israeli policy at a time when it is harder and harder to ignore the brutal reality of its oppression of the Palestinian people. ADL has chosen to use its reputation as a defender of human rights and an adversary of those who spews racial hatred as a license to spew its own brand of racial hatred.

The report uses a total of 359 incidents that took place on the more than 5,000 college/university campuses across the country during the 2021-2022 academic year that ADL believes should be spotlighted as the indicator of a growing problem of campus antisemitism. In this total are “one physical assault; 11 instances of vandalism; 19 instances of harassment; 143 events; 165 protests/actions; and 20 BDS (Boycott, Divestment, and Sanctions) resolutions… [and]… referenda.”  While noting that all of these incidents may not be evidence of antisemitism, and by not separating out those they believe are antisemitic from those they categorize as valid political protest, ADL is using their reputation and their influence to smear anyone who dares speak out in support of the Palestinian people and against Israel actions and policies.

The ADL is clear about its reasons for putting its immense resources (total assets exceeded $220 million in 2020.) behind this effort:  “…the denial and vilification of the right of Jewish self-determination and statehood anywhere in the Land of Israel, which is antisemitic at its core.”

In this cleverly crafted mélange, they lump together “verbal or written harassment of Zionists or Israelis, efforts to coopt campus institutions to support BDS movements, anti-Israel protests that affect the campus, events that feature radical anti-Israel messaging and programming and the dissemination of rhetoric or policies that marginalize, demonize, or exclude Jews, Zionists, or Israelis from campus life. Many of the incidents described in this report are antisemitic in intent or in effect. While other incidents may not be antisemitic, collectively they may contribute to a more hostile campus environment for Jewish students.” 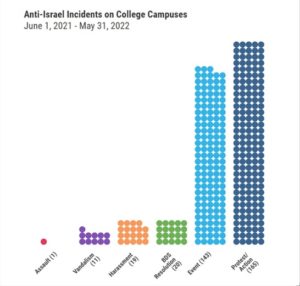 Among the protests and events that ADL calls out are those which have speakers or signs that see Israel as a “settler-colonial” state or “apartheid state;” call… for  Boycott, Divestment, and Sanctions (BDS) against Israel and Israel-based companies; and support… violence or a military confrontation with Israel…”or where and organization”…posted a video of their demonstration on social media alongside text reading: ‘Birthright is propaganda that manipulates Jewish heritage and identity into support for the Israeli apartheid state.’”

Just days after I read the ADL’s report I read an article in a liberal but mainstream Israeli newspaper (Haaretz)  (“Ben-Gvir Is the Hope”) discussing how the upcoming Knesset election, in which the author used the very language that ADL found antisemitic. The author, reflecting on the possible outcome of Israel’s November 1 Parliamentary election, ironically reflected that a Conservative majority that will include in a prominent role, Itamar Ben-Gvir, who Reuters released described as  “a man convicted in 2007 of racist incitement and support for a group on both the Israeli and U.S. terror blacklists. It would also attest to the success of a bid to cast himself as a friendlier face of the far-right.”

“The apartheid will not collapse on its own. Israel will not wake up one morning and say: ‘Apartheid isn’t nice. Let’s put an end to it.’ Only international pressure will wake Israel up…. Ben-Gvir hasn’t even been appointed as a minister. When he does take the reins of a ministry, the world will awaken to a new reality, worse than that of Hungary and Italy. Ben-Gvir’s right wing is much more extreme and violent than any in Europe today….Israel might feel that there is a price to pay for apartheid. For the first time in their history, Israelis might be punished for the occupation and its crimes. For the first time, perhaps they will be forced to pay for them in image, condemnation, and money for weapons as well…Ben-Gvir will rip away the masks. The left is the founder of the settlers, David Ben-Gurion and Ephraim Katzir were the ones who planned to poison the Palestinian wells, not the violent punk Ben-Gvir. And neither did Ben-Gvir invent the cruelty of the occupation, nor even did Netanyahu; rather, Labor Party figures did that, some of whom won the Nobel Peace Prize.”

The author was not a Palestinian “radical;” the author was not a known antisemite. The author was Israeli Jewish Haaretz columnist Gideon Levy. His words challenge the ADL and other supporters of Israel who wish to ignore the truth that is right in front of them. His words might make the ADL and those they desire to influence uncomfortable because they paint Israel in an unflattering light and describe policies and behaviors that challenge the mythology of Israel as a bastion of democracy with respect for human rights.

But are they, as the ADL seems to be leading us, words that are antisemitic because they attack the underpinnings of Zionism as the Israeli Government as many Israelis define it?

In a footnote stuck at the bottom of their report, the ADL comes clean. “Most of the incidents featured in this report are legal expressions of First Amendment-protected speech. ADL is a staunch supporter of the First Amendment and does not advocate for restrictions on campus speech. We do, however, feel it important to document how anti-Israel activists are using their speech in ways that degrade campus life for many American Jews.​”

If they were honest, they would lead with this and focus our attention on the real dangers of antisemitism. As a human rights organization, they would lift up the cause of the Palestinian people rather than damn it. In doing so they would force us all to come to grips with how difficult it is to come to acknowledge that there are two narratives about a very small piece of land that struggle to coexist, if it is even possible to coexist at all. They would have to come to grips with the reality of Israel’s decades of occupation and the human toll that it is taking on the Palestinian people. They would have to allow the debate to be heard, however, heated and challenging it might be.

I know as a Jewish American who saw Israel as part of my history and who reveled in the comfort of being in a land that made my Judaism so comfortable, it has been difficult to recognize that my joy was coming at the expense of other people. I began to recognize that as a Jew my history of Israel had been learned through the same myopic lens that as a white American I learned much of our national history. But I now know that I cannot uphold the values I hold dear and the belief that all lives are equal unless I recognize that those who have been oppressed, in this country and in Israel/Palestine, have a voice that is recognized and heard. And that voice does not need to be gentle nor should it worry about offending me.

The ADL can do better. It needs to heed its own credo, “to secure justice and fair treatment to all.” Palestinians are part of that all and the ADL is falling very short when it attacks them for advocating for their beliefs.