It’s been eight days since election day, a day that taught me a lot about the mechanics of collecting and counting votes and a day that gave me hope for our future as a democracy.

This was the first time that I stepped forward and volunteered to serve as an “Judge of Elections” in response to several indications that the Chicago Board of Elections was having trouble recruiting the manpower they would need come November 8. The job description was straightforward:

Judges of Election are paid to manage the precinct polling place and assist voters. The job is challenging and rewarding.
Judges share these responsibilities:

To qualify as a Judge, I needed to submit a short application and meet a few qualifications:

– a US citizen
– a registered voter in Cook County (if 18 or older)
– able to speak, read and write English

And, lastly, I needed to complete an online training program that included passing a series of tests of my understanding of the election process used in Chicago and how to set up voting booths and equipment.

And when I had done that, I was a “judge”, as indicated by the certificate I received in the mail shortly before election day along with information about the specific precinct I had been assigned to.

With that as prologue, my education about running an election actually began that Tuesday morning when my alarm rang at 3:45 am so that I could be ready to go at 5:00 am.

I was part of a team of six Judges supported by an Election Coordinator. Half of us had never served before and all of us had never worked an election at this specific location. We learned at 5:00 am, as we gathered in front of a locked, dark school building, a site that we were to share with another precinct. It soon became clear that while all of the Judges and Coordinators working in this building were there on time, we would be delayed because whoever was responsible to open the building for us had not shown up.

After a lot of phone calls by our team and help from the staff of the local Alderperson, we were actually able to enter the building 30 minutes after the polls were to be open! The best we could do for the few early bird voters was apologize, suggest they could go to the early voting site in their area or come back later to see if we got things going.

Once in the building, the seven of us who were going to staff this voting precinct now had to race through the physical setup of our site. That included making the decision that two precincts could not share the fixed-seat auditorium the school had assigned us because there would not be ample room to ensure the needed privacy for our voters. Once we went to work, we needed to physically unpack the equipment; physically erect voting booths for those using paper ballots; and ensure that they were located in a manner that would allow voters to vote privately. We needed to be sure we had one specifically set up to accommodate voters who used walkers and wheelchairs and a separate station that would accommodate digital voting. Tables needed to be set in place for the Judges. Then we had to set up the electronic equipment we would be using and update the electronic poll books we would need to validate registered voters and to register new ones. And we had to organize the multiple versions of the ballot we would be using; the materials needed for voters who would be required to vote through a provisional ballot, and the forms we would be using to keep a paper record of our work during the day.

If that sounds complex, in reality, it was even more complicated to get done correctly, especially for a crew that had never worked together and a crew with half of its members, like me, doing this first time.

But we got it done and greeted our first perspective voter at about 7.30, only 90 minutes late. 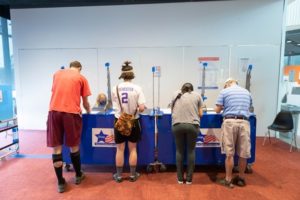 The six of us who were serving as Judges then spent the next 11.5 hours greeting prospective voters, ensuring they were properly registered to vote in our precinct, directing those who were in the wrong precinct to the right location, and registering unregistered voters so they could vote. then ensured that each person coming to vote was actually registered and eligible to receive a ballot. In this process, we needed to ensure that those who had requested mail-in ballots had not had that ballot that was already counted.

And we were controlling that every eligible voter, and only eligible voters received the proper ballot and understood how they were to use it. Once all of this was satisfied, we could hand voters a ballot and send them to the privacy of the voting booths we had set up.

We soon discovered that the paper ballots we were using required great care by the voter to avoid having them rejected by the scanner we were using. Stray marks would become a major problem for the voter. We had to “spoil” the ballots that were rejected by the scanners and issue replacements so voters could get their selections properly recorded. And we needed to give clearer and clearer instructions to help voters avoid this pitfall.

This went on hour after hour until voting ended at 7 pm and one of us could shout, “The Poll is closed!”

But our job was not yet done. We needed to ensure that the scanning device which recorded every ballot was able to download our results to the Board of elections. And then we needed to properly close out the site, this included putting a printout of the results along with a number of reports together with the data cards from the scanner into a pouch to be physically returned to a Board of Election location by two us. This process was as complex as it sounds, leaving the Board of Elections with a wide paper trail to document what had occurred at our location. And we needed to physically take down and store away all of the furniture and equipment that we had frantically set up in the morning.

And when this was all done, we could bring a gavel down on our part of the 2022 midterm election.

What happens in Chicago may not look exactly like what occurred in your polling station since the laws and rules that structure elections vary from state to state, county to county, and even city to city. That in itself is something to ponder. Does this really make sense when we are electing those who will serve in offices that cross all of these boundaries? Shouldn’t every vote result from the same process?

To run our precinct, we needed 7 people to take the time needed to qualify and the long day to actually staff the poll. Across the nation, the most recent survey (2020) by a Commission appointed by the US Congress to advise on elections told us that there were more than 132,000 polling locations manned by more than 775,000 poll workers. That’s a very large pool of people needed to take on this responsibility to ensure that everyone can have their votes counted.

In Chicago, election day was pleasant. No angry poll watchers challenging how we were running the election. No people with guns. Just a lot of mellow voters who appreciated their neighbors making it happen for them. But can we ensure this will be so if the nation’s anger continues to rise and election workers become targets of hate? That’s the risk of tolerating the level of anger election deniers are fostering. If they get the traction they strive for, their fear of a misrun election will be a self-fulfilling prophecy.

I also worry about the funding needed to make this system work and to keep its equipment state of the art so it can be properly operated by that large pool of occasional election officials. If we don’t spend it, we will not be able to make elections work.

Beyond all of these concerns was the very warm feeling I came home with because I was the oldest member of my team. I was serving alongside young folks who had taken a day off of work to help run an election. They saw this as something important to do, as an act of making our democracy work. If this was replicated across the nation, that is a very reassuring sign that we are passing on a belief that the work of democracy is worth doing.

That made a very long day seem very satisfying and left me hopeful.