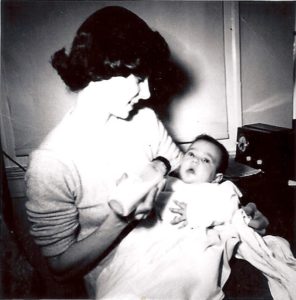 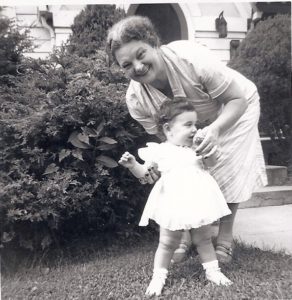 I always get a bit nostalgic on December 24th.  It has nothing to do with the holidays.  I’m Jewish and don’t celebrate Christmas and Hanukkah is a minor holiday (really!) and often over by then.  But December 24th is the day of both my mother and her mother were born on. And they share one more thing, they were both major influences on me.  While I think about them often, probably daily since their pictures sit on my desk, I think about them even more often on December 24th.

My grandmother, Glenna Krakoff, lived with my parents her entire life, since the death of her husband, soon after my parents married and my Dad came home from WWII and bought into his dry goods stores.  He and my grandmother were legally business partners, but she really stepped back to let “the man” run the business. Grandma was a feminist in encouraging her three daughters and five granddaughters to excel…but in traditional ways. Yet she was always proud when we moved a bit “outside the box” and would quietly let us know.  As the oldest granddaughter (there were four grandsons ahead of me), I held a special place and often felt Grandma’s support as well as her trepidation as I took on the world and embraced feminism.

I think I got my passion for keeping and maintaining friendships from Grandma. She was a social butterfly with a huge group of friends, almost all women, widows like her.  We referred to them as the “girls”!  She played cards with them weekly, went to endless meetings for various groups and causes with various girlfriends.  They were all “aunts” because we knew they by their first names, but putting “Aunt” in front of it was more respectful.  They were often the grandma’s of our friends, so there were connections beyond our grandmother. Grandma traveled abroad (on the cruise ship the Queen Elizabeth and others) with the “girls”. She spent countless hours on the phone with them and there were lunches out and lunches “in” at each other’s homes.  Friendships and their maintenance were important and not to be taken lightly.

Grandma was not a great cook. But she was an outstanding baker of Tollhouse cookies!  For the uneducated, these are the original chocolate chip cookies from the recipe on the mustard yellow package of Hershey’s semi-sweet chocolate chips. And when Grandma would make them, it was a two-day process… so we would need to stay out of the kitchen (except for the occasional tasting).  Her process was precise, with bowls lined up with ingredients waiting to be mixed and cookie sheets lined up waiting their turn for precisely measured cookies.  And these cookies were precise!  They were tiny… The size of a quarter.  Baked so they were crispy and you could fit a good number into a Saran Wrap lined coffee can (we could never throw away an empty coffee can and all our cousins saved them for her).  And the filled cans were carefully stored in a locked closet to be doled out as needed or mailed to grandchildren at college or delivered to sick friends (but all had to return the empty cans!).

Maybe this is why I baked so many cookies.  But I never baked Tollhouse chocolate chip cookies like hers. My youngest sister, Sue does… coffee cans and all!!  She is my baking shero!  She obviously got that gene from Grandma!

My mother, Betty Remick, was grandma’s birthday gift.  She was the middle of three daughters, but in some ways, she was the one who quietly steered the three sisters.  She was the connector between them and was always the one who kept the families together.  All three sisters married and lived in Dayton, Ohio so spending time together was just natural.

Grandma lived with us, and when I think about it now, it was the only choice.  My parents could make it comfortable for her, no matter what, and her other two daughters and their husbands could not.  One of my aunts had her mother-in-law living with them and the other worked and traveled a great deal which would have often left Grandma alone.  Our house was the best choice for this living arrangement. And it was my mother who put everyone else’s needs before hers, so if someone in the family needed help with something, that was her priority.  She was an amazing juggler of tasks. She could drive carpools, volunteer at two different places, do the bookkeeping at Dad’s stores, get Grandma to her card games and still have dinner ready for all of us. She was there to help with homework and get us to afterschool lessons too. When I think about it now, as a parent that worked full time, my own mother’s schedule makes me tired.

But what was special about my mom was not what she did, but the way in which she did it.  She always saw the good in people and pushed others to do the same.  She never wanted to be at the front of the room, but always encouraged me, especially when she saw me excel in public speaking and leadership.  When my Dad was clear that my older brother could choose any college he wanted but a state school would be fine for a girl, it was my mom who took my side in making sure I had the same choices as my brother.  It was my mom who told my father that he had not listened to me, when he disowned me for leading protests as a college sophomore. (He later called me to say we should talk!).

My mother was loved by so many for what she did in quiet, unassuming ways without a thought for thanks or accolades.  She showed us all the true meaning of grace. I often think about how much she taught me without ever knowing she was doing it.  She was a very beautiful woman, on both the outside and the inside.  And her thoughts, even as she was dying were for others.  Her only request to me, as the only one of her four children who saw her while she could still talk before she passed away was, “Promise me that you and your siblings will stay close.” I can assure you that the four of us have kept that promise. It was just the kind of request that she would make – to ensure that her children would stay in touch.

As each December 24th comes around, I find that I have much to reflect upon.  We always celebrated Grandma’s birthday on the 25th since everyone was off work that day.  We would gather at our house for a big dinner and a grandchildren’s talent show for Grandma.  And Grandma would give us her Hanukkah presents (even if Hanukkah was over!) that she had showed us months ago (she could never keep a secret!).  And my mother’s birthday was somehow lost in the shadows of her mother’s.  But that never seemed to matter to her. There was always joy in celebrating her mother. That’s just how my mother was.

Both of these women helped to mold me into the person that I am today. And I am so grateful for who they were and what impact they had on me. There are so many more stories…