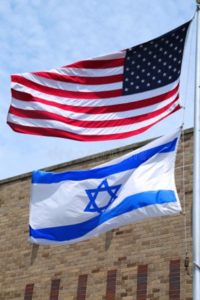 Last week I wrote about how quickly Israel’s current government has begun to match its actions to its words. Within days of assuming power, they had removed any doubt that they are a supremacist government. They are a government that no longer feels any need to hide its belief that all of the land of Israel/Palestine is to be ruled by Jews (and under Jewish law) and for the benefit of its Jewish citizens. All others, no matter their claims to the same land, can live there only by giving their fealty to their Jewish rulers. Any act of protest, non-violent or violent, will be crushed.

We are seeing a similar story unfold in our own backyard. In the United States, with its strong pro-Israel politics and its vocal Jewish population, we are witnessing the weaponization of antisemitism and the cancellation of voices who dare to support Palestinian causes.  This is not new.  It has been going on for years.  But now it has found a stronger voice. We are seeing Jews labeled antisemites for their political positions on current Israeli policies, worried about voicing their opinions for fear of being ostracized within the American Jewish community.

Consider the recent case of Kenneth Roth, the former CEO of Human Rights Watch, the deservedly acclaimed defender of basic human rights across the globe. When Roth recently retired after 29 years at the helm of HRW he was recognized as a force for good with unrivaled credentials. It was not surprising then that he was invited to become a senior fellow at  Carr Center for Human Rights Policy at the Harvard Kennedy School. It was the type of prestigious second career where we would expect to find Roth.

But it is not to be because he and his organization were willing to speak the truth about modern Israel. And that had placed a target on his back.

In a long and detailed article, The Nation tells the story of how this champion of human rights was blackballed by the power of Jewish Israel. “’We thought he would be a terrific fellow,’ says Kathryn Sikkink, the Ryan Family Professor of Human Rights Policy at the Kennedy School. A leading academic in the field, Sikkink has been affiliated with the Carr Center for nine years, and during that time nothing like this had ever happened. As she noted, the center has hosted other prominent human rights advocates, including William Schulz, the executive director of Amnesty International USA from 1994 to 2006, and Salil Shetty, the secretary general of Amnesty International from 2010 to 2018.

“Sikkink was even more surprised by [Dean Douglas Elmendorf’s] explanation [of the blackballing]: Israel. Human Rights Watch, she was told, has an ‘anti-Israel bias’; Roth’s tweets on Israel were of particular concern. Sikkink was taken aback. In her own research, she had used HRW’s reports ‘all the time,’ and while the organization had indeed been critical of Israel, it had also been critical of China, Saudi Arabia—even the United States.

“…In Elmendorf’s view, Kenneth Roth had no place among those scholars and practitioners. The school could accommodate a former CIA director who leaked classified information and a former senior CIA official who apologized for torture—but not the person who led Human Rights Watch for three decades.”

Roth had committed the ultimate sin because he allowed, even championed, HRW to study conditions in Israel and Palestine and to conclude that both Israel and the Palestinian Authority were serious human rights violators. And Roth, looking at the data his organization was able to gather, had the audacity to declare Israel as an Apartheid state. No matter what the details that were uncovered. No matter if the conclusion might be one that a reasonable person might come to. In making this finding, Israel saw itself attacked by a terrorist. And it and its supporters responded with force to silence and discredit the critic.

And every weapon they can use to destroy those who do not accept this as true is justified. Kenneth Roth has discovered that in an attack that took place on U.S. soil.

In the Roth case, power was directed at a single prominent voice. More often and with less fanfare the attack targets Palestinian group’s trying to peacefully put forward their case for freedom.

At the University of California Berkley’s Law School, we are watching a group of Pro-Palestinian student groups that are being attacked for the political strategy they have chosen. They believe that Zionism denies their national existence and they are challenging it. This threatens the bedrock of Israel and of its current government. In many ways they are arguing for a political position that might be the mirror image of Israel’s positioning.

In support of their efforts, as described by the Daily Mail,  they “ have adopted a bylaw prohibiting pro-Israel speakers at events. Written by Berkeley Law Students for Justice in Palestine (LSJP), the bylaw is meant to ensure ‘the safety and welfare of Palestinian students on campus….’”

And for this, they have come under fire. This action elicited a strong response from pro-Israel forces on campus and from the larger political power structure. Their opposition quickly places this strategy of protest as un-American (it violates first amendment free-speech rights) and anti-Semitic (because Israel is at the heart of Jewish identity.) The strength of the protests has been enough to bring the Department of Education to campus to investigate whether there are violations of f-ederal law and regulation. There have been attacks on the school’s Dean who defended the student group’s right to choose their allies even if he personally disagreed with them.

As described by the SF Chronicle “Two pro-Israel attorneys have filed a civil rights complaint against UC Berkeley over the refusal by nine law school student groups to invite guest speakers who support Zionism. The attorneys said anti-Zionism is antisemitism and that the groups, and the university, are legally required to host speakers of differing viewpoints.”

In an hour-long dialogue hosted by Peter Beinart, Dylan Saba of Palestine Legal explained the strategy of protest that does not seek to change the minds of those who are on the other side. The strategy is to build increased pressure on Israel in support of redressing the rights of Palestinians and to fulfill their national vision. He strongly said that the comfort of those that this strategy makes uncomfortable because it makes Israel a pariah is not their problem. Challenging him in the dialogue was Professor Ethan Katz who wanted Mr. Saba to accept that this was an unwise strategy. He wanted Palestinians to only act in ways that were acceptable to Jewish and pro-Israeli sensibilities. By doing so, it would silence their harsh criticism and their rejection of Israel.

What concerns me most is that here and in Israel/Palestine, the voicing of an alternative narrative and non-violent protest of the conditions on the ground is becoming more and more unacceptable to Israel and its supporters. When non-violence is treated harshly, and when non-violent protests and protestors are punished severely and made more and more difficult, the oppressed are left with only two options. One is to give up their hopes and their dreams and accept another truth as theirs. The other is to escalate to violence. If either of these outcomes is seen by those in power as a victory, I think they are ignoring the lessons of history.

Yet Israel and their supporters seem so sure that their case is right and just that they are now going down this path. I do not see good things resulting and for that, I am very sad.