Last night President Biden spoke to the nation about the need to expand the meaning of public education to prepare students for the “jobs of the future”.  Two more years of public schooling, in community colleges or formal apprenticeships, must now become part of our societal responsibility to each other.

Yet, some recently published research suggests that we need to change the way employers view job applicants as much as prospective workers need better skills.  Even when workers have the right skills employers are not hiring them because, even if they have the needed skills, they do not have the right degree!

And, whether we wish to recognize it or not, this bias reflects the nation’s structural racism.

“Imagining Equitable Pathways to Mobility”, a report created by [email protected] and McKinsey, gives us a disturbing picture of the current experience of the millions of men and women who are already STARS (skilled through alternative routes such as community colleges, apprenticeships, and on-the-job learning).  “STARs are not able to leverage their skills for higher wage work the same way that workers with four-year college degrees do…. Over time, STARs make more transitions than their degreed counterparts and each transition carries a relatively high likelihood of wage decline. Wage gains, when they occur, are smaller. Across their job trajectory, these differences accumulate, leaving STARs well behind. These trends run counter to the notion that workers can work their way up an economic ladder by translating their on-the-job learning to higher-wage work.”

Even with the skills that employers say they need for jobs that pay well, the bias of employers toward 4-year college degrees leaves many skilled workers in the economic dust. “Of the 79.5 million job transitions that STARs made from 2010-2019, only 39% led to an increase in wages of 10% or more. Of the other transitions, 23% were lateral moves with no significant wage gain, and a stunning 37% led to lower wages. Transitions are even harder for middle-wage STARs; only 23% of transitions made by middle-wage workers yielded higher wages.”

On an annual basis, a STAR will earn $25,000 LESS than a similarly skilled colleague who has a college degree. ($19.20 per hour versus $31.20 per hour).  “as many as 30 million U.S. workers without college diplomas have the skills necessary to earn 70% more…employer education requirements hold these workers back.”

Data compiled by the US Bureau of Labor Statistics tell us that if degrees continue to be the controlling determinant of earnings, we will continue to see a very slanted economy. 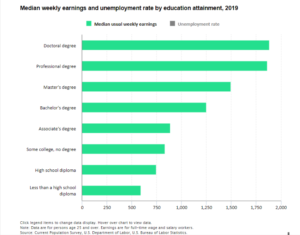 plifies the already racially biased economy and educational system.  A Brookings Institution report described the makeup of the low wage work force: “Low-wage workers are a racially diverse group, and disproportionately female. Fifty-two percent are white, 25% are Latino or Hispanic, 15% are Black, and 5% are Asian American. Both Latino or Hispanic and Black workers are overrepresented relative to their share of the total workforce, while whites and Asian Americans are under-represented. Females account for 54% of low-wage workers, higher than their total share of the workforce (48%).”

The [email protected] study provided more insight into how degree bias disproportionally impacts BIPOC workers even as they try to leverage the skills we say they need to have to be successful: : “around 85% of Hispanic STARs currently working in management (in jobs such as food and service, construction, and property managers) will face degree requirements when trying to move into similarly-skilled but higher-wage work….degree requirements hinder mobility for STARs who have skills to move into higher-wage occupations but lack the formal credentials often expected by hiring managers…This dynamic reinforces the occupational crowding of Hispanic STARs in lower-wage work. Workers who manage to navigate the hiring process to transition into roles that traditionally require a four-year degree would earn a median hourly wage of $41 (a median wage increase of 62%), compared to a wage of $24 (a 47% increase) for Hispanic STARs who move up the economic ladder, but remain in roles that do not have degree requirements.”

Yes, strengthening our public education system is important. But we cannot ignore that it will not be sufficient unless we recognize that we do not yet believe that all are created equally. We still live in a system that values being white, that values being rich, and rewards people on things unrelated to personal capabilities and skills.

We may preach that people have to just work hard and they can pull themselves up. The reality is that this is not working so well.

Just adding two more years to the educational menu will not be enough. Just saying that, as Senator Scott did last night, “America is not a racist country” will not end the reality that we are.