It is big news when McDonald’s announces that $13/hour would now be the new minimum wage for their 36,500 workers who cook burgers and fries in their corporate stores. $13/hr.  means that IF they could work a 40-hour week, they would be reporting an annual income of $27, 040 when it’s tax time again. To put that in context, this is just slightly above the Federal poverty level of $26,500 for a family of four.

Perhaps this was worthy of notice because it came in the middle of an ongoing and heated debate about unemployment, stagnant wages, and a growing wealth gap. This is a debate which too often blames workers for their own plight.

But the answer might just be that much of the problem rests in a corporate-centric government that has for decades created an economic environment that has kept their thumbs on workers and the amount of money they take home. That is the conclusion that Economists Lawrence Mishel and Josh Bivens reached in a paper published last week by the Economic Policy Institute. 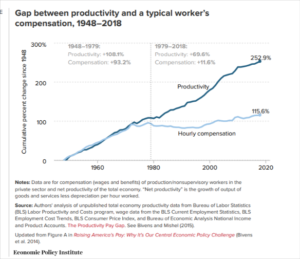 Over multiple decades the authors document that the link between increased productivity and worker earnings broke decades ago. The result is that workers lost their share of the benefits of a growing economy. “The last four decades have seen a systematic divergence between the growth of economy-wide productivity (the amount of income generated in an average hour of work) and the growth of hourly compensation (wages and benefits) for typical workers… Productivity grew 108.1% from 1948 to 1979, accompanied by 93.2% growth in worker’s compensation. Between 1979 and 2018 productivity grew 69.6% (1.2% annually) further, but a typical worker’s compensation (wages and benefits) grew only by 11.6% (0.24% annually)…the pay for typical workers would be more than 40% higher today if inequality had not risen over the 1979–2017 period.”

The usual explanation for these outcomes cites the need for improved education so that workers can move into higher-paid, more technical positions.  (I recently noted that this seems not to be true because  there are millions of skilled workers who are not being given better-paid jobs because employers refuse to recognize their capabilities.) Others point the finger at the character of those in low-wage jobs arguing that workers are being coddled by government handouts, that they are not willing to do hard work, or relocate.

Economist Joseph Stiglitz summed this up in a recent paper “the commonsense statement that employers have power over their employees has long been heretical in the economics profession…. More and more, firms have demonstrated high and increasing levels of market power. At the same time, the bargaining power of workers has weakened…. [T]his imbalance of market power has consequences…. It enables firms to suppress wages of workers below what they would be in a competitive marketplace—contributing to the inequality crisis facing the country…. Employers and employees need to be able to bargain on more equal footing…”

Mishel and Bivens argue that the data does not support these “conventional wisdom” explanations. “over the last three decades, there have been no increases in the wage gaps between those with some college, those with a high school diploma, and those who left high school. Similarly, that the wage gap between median (50th percentile) workers and low-wage (10th percentile) workers has been stable or declining since 1987 stands as a long-standing critique of the education wage gap hypothesis…”

From their perspective, the reason that labor is not being fairly rewarded is that government policy has made it not possible: “A more convincing theory of sluggish wage growth and inequality in the U.S.: Policy-driven wage suppression… Wage growth has been greatly directed by policy decisions and is a political variable. It responds—robustly—to big policy changes. But for decades these policy decisions have gone in the wrong direction. Policymakers can deliver prosperity to the vast majority of U.S. workers based on faster wage growth. Whether workers obtain a fair share of the economy’s gains in the future will depend not so much on abstract forces beyond their control but on demanding that their political representatives restore bargaining power to workers, individually and collectively…This policy assault (acts of commission and omission, such as failing to update labor law or the value of the minimum wage) either directly undercut these institutional sources of power or accommodated employers’ efforts to undercut them. Business forces were secure knowing that policymakers (legislators, executive branch officials, and judges) would not change legislation, enforcement priorities and effectiveness, or legal interpretations to countermand this assault on a typical workers’ power in the labor market.”

As Common Dreams noted, policymakers have moved to weaken the power of workers on multiple fronts.  “lawmakers’ willingness to tolerate high unemployment rates, employers’ ability to tamp down workers’ attempts to unionize through intimidation campaigns and so-called “right-to-work” laws, trade deals which give American workers little leverage, and non-compete contracts which make it harder for workers to seek better jobs as examples of the policies that have contributed to the wage gap.”

The preoccupation of many policymakers, at the Federal Reserve, in Congress, and in the White House with the dangers of inflation results in using higher than necessary levels of unemployment as a preferred tool when inflation is feared. This has both tempered the market forces that push salaries higher when workers are in short supply, the forces which appear to have motivated McDonald’s recent action, and induced union leaders to agree to lower wages as protection of greater job losses.

The tangible impact of decades of policy makers’ placing their thumbs to weigh the scales against labor is quite tangible. “Without anti-worker policies in place, the typical U.S. worker would have made $33.10 per hour in 2017 as compensation kept up with productivity growth, instead of the $23.15 which was the average hourly wage that year.”

The weight of this loss falls, in a nation with its built-in racial and gender biases, most heavily on women and workers of color.  The EPS report found that “because white women and Black workers tend to be disproportionately concentrated in the bottom 90% of the wage distribution, any force that suppresses wages for the bottom 90% will make them lose ground to white men and whites overall, all else equal…because inequality concentrated gains in the top half of the income distribution over that time, and because white households were disproportionately concentrated in the top half, the income gap (measured in dollars or as a percentage) between white and Black households actually grew.”

As with so many deep, societal challenges, finding meaningful answers requires us to be willing to rethink our assumptions. Education is important and all children should be entitled to quality education. Opportunities to learn the skills that well-paying jobs require should be there. Those with skills should have opportunities to receive the economic benefits that should be there. But, doing all that may not be enough if it does not address the underlying, systemic bias against workers. The government needs to be willing to rebalance the scales and limit the power of employers to control the labor market for their own profitability.

As Dr. Mishel put it in comments reported by the New York Times, “If you think about a person who is dissatisfied with their situation, what are their options? Almost every possibility has been foreclosed. You cannot quit and get a good-quality job. If you try to organize a union, it’s not so easy.”

If we can rebalance the scales so that labor is not handicapped we will, perhaps, need to read less frequently about how the richest have gotten richer while we struggle to keep food banks supplied.