Attempts to respond to the ravages of the pandemic, rebuild the nation’s fraying infrastructure, and ensure that our social safety net can protect those who are at risk have stalled.

The barrier we cannot overcome is the immense political power of the wealthy class.  Over decades, a small slice of our society has been allowed to amass huge fortunes, concentrating more and more resources in the hands of a small portion of our citizenry.  and to spend those funds to protect their own interests. The wealthy have been allowed to openly carry political weapons of immense firepower that have ridden roughshod over the popular will and protected their own self-interest. 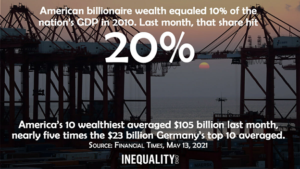 As far back as 1974, Charles Koch, whose assets are estimated to exceed $43 billion, gave us an insight into how the wealthy convert what is good for them into a political quest.  As cited by the advocacy group UnKoch My Campus,  he said “… there are basically four ways in which [the pro-capitalist businessman] can fight for free enterprise – through education, through the media, by legal challenges, and by political action… I do maintain, however, that the educational route is both the most vital and the most neglected… We should [support] only those programs, departments or schools that contribute in some way to our individual companies or to the general welfare of our free enterprise system.”

With his almost limitless resources, Mr. Kock has been able to act to fuel the intellectual and pollical infrastructure that can develop and lobby for his objectives and for his personal benefit.  He contributed, according to research just released by UnKoch My Campus, “over $458 million in grants to over 550 universities and higher ed adjacent non-profits since 2005. Unlike other philanthropists backing higher education, Koch gives to schools with the explicit goal of creating intellectual fodder for his network of political interest groups and recruiting and training students to integrate into that network… in 2019, Koch university’s funding totaled $112,044,071.”

Koch’s political and philanthropic giving is not an outlier, a “Black Swan.” He stands as one of a small, favored group able to spend without much constraint, the product of a national environment that sees such spending as just another way of speaking. But it is very loud and easily drowns out the voices of you, me, and our neighbors.

Consider what happens when the wealthy class does not see the personal benefit of fixing much that has been broken, much that their own actions have helped break. The effort to finally raise the Federal Minimum wage to $15/hour, a level still below that needed to live comfortably in much of our nation, has become a target. As have efforts to rebuild, long starved components of our government like the US Postal Service or the IRS. It is no wonder that efforts to raise taxes on the wealthy to pay for needed national investments face death by filibuster.

For example, limiting the reach of the Tax Code’s “carried interest” provisions to raise revenue and slow down the widening wealth gap has been proposed and has become a prime target for the wealth classes ire.

Bloomberg Financial illustrated the cost of carried interest by using private-equity billionaire Stephen Schwartzman to model how Biden’s proposal would be felt by extremely high earners.  “Last year, he earned $78 million in “carry” including securities he could sell later on — the bulk of his compensation — and $524 million in dividends on his stake in Blackstone. Under the Biden plan, his carry take would shrink to $44 million and his dividend pay would fall to about $300 million…the average partner at a major private-equity firm, who would make $30 million in carry if certain returns are met, could expect to pay about $13 million in taxes, up from $7 million under the current system. For an average vice president, who is likely near the top 1% of earners, they could pay as much as $2.3 million to the IRS, up from $1.2 million.”

Those who will be asked to grow their own fortunes a bit less quickly have been quick to respond, often dumping on a government they have weakened and starved. These are men and women who do not need government as their safety net, ensuring food, shelter, education, and health, so it is of no consequence when it chokes and sputters. And as it fails, they can point to its incompetence as a reason to give it even less, and in the process keep the wealthy from paying their fair share.

Just listen to the words of Jaime Dimon,  chairman and chief executive officer (CEO) of JPMorgan Chase, who earned $31 million last year and whose total wealth is estimated at over $2 billion. In a recent interview with the CEO of Investment Company Institute, he said when considering increasing taxes on the wealthy that  “I think we need demonstrate we’re serious about how we’re going to spend your money. And then you probably won’t mind paying less. A lot of wealthy people, if they thought they were really lifting up those poor kids in the South Bronx they’d be willing to pay more. But most people don’t think shipping money to DC is going to be productive. So, you got to earn that a little bit…I got an email from someone today saying government is good at doing bad things, but it’s really bad at doing good things. So government, I think when they pass these bills and stuff, they should have accountability, responsibility, expected outcomes, and then measure it and tell us about it. And they should be doing that everywhere. Every department should be doing a report, what we do with your money.” This from a wealthy CEO who bank has been fined and penalized more than $1 billion for its own failings.

The economic devastation caused by the pandemic caused millions of Americans to find paying their rent or mortgage difficult and fell in arrears. To take the threat of eviction and homelessness away the Centers for Disease Control issued an emergency order making it harder to dehome someone while the economy was ill. Wealth did not like that, their current and future fortunes were at risk.

Enter Billionaire Charles Koch’ again, using his wealth to spend philanthropically and politically to protect his wealth at the expense of the nation.

According to recent reporting by the Daily Poster, his charitable “foundation has bankrolled three conservative legal groups leading the court battle to eliminate prohibitions against tenant evictions during the COVID-19 outbreak. At the same time, Koch’s corporate empire has suddenly stepped up its real estate purchases during the pandemic — including making large investments in real estate companies with a potential financial interest in eliminating eviction restrictions. In the last few months, the Texas Public Policy Foundation, the Pacific Legal Foundation, and the New Civil Rights Alliance have been pushing federal courts to strike down the Centers for Disease Control and Prevention (CDC) eviction moratorium, which is designed to protect millions of Americans from being thrown out of their homes during the pandemic. The groups have so far won two rulings.”

While, according to the Dailey Poster, “New data from the U.S. Census Bureau‘s most recent survey of people who are not working…shows that far more people are now reporting that they cannot work because they are caring for children or elderly relatives…[and]…some people are less willing to work difficult, low-wage jobs that have become even more stressful and dangerous due to COVID…”  there is strong push back against raising the minimum wage, building stronger child and elder care systems because it will require the wealthy paying their fair share for a fairer and more humane society.

They reject the wisdom Lindsay shared with Daily Poster, “Responsible employers will not have trouble bringing people back to work when the actual barriers to returning — access to childcare, inadequate pay, and uncertainty about a healthy and safe working environment — are removed” because they may have to share some of their wealth.

Perhaps most cynical has been the underfunding of the Internal Revenue Service which has lessened its ability to ensure that the wealthiest taxpayers pay what they owe. The IRS today is a purposefully hollowed-out shell, unable to do its job. Senator Elizabeth Warren recently wrote about her proposal to fix this problem that “Our tax system shouldn’t be rigged for those who can hire armies of lawyers, lobbyists, and accountants. My bill would give the IRS the resources it needs to fairly enforce the tax code, modernize its IT systems, and improve taxpayer services…”

The savings for the wealthiest taxpayers from a broken IRS is large, as described recently by Truth Out. “Officials estimate that the IRS misses out on as much as $1 trillion a year in uncollected taxes. The top 1 percent of earners are responsible for a large portion of this. A recent analysis found that the top 1 percent avoid taxes on 21 percent of their incomes, which could amount to as much as $5 trillion in lost revenue for the government over a decade.

The change in administration and the election of more progressive voices to the US Congress combined with the devastation of the pandemic has placed the problem of the political power that we have allowed the wealthy to wield in a sharper focus.

Our tax code rewards those with great wealth and allows them to get even wealthier. Our tax system is outgunned, unable to afford to hire the staff needed to ensure compliance and challenge those who will not pay what they owe. A philanthropic system allows the wealthy to garner further tax benefits for activities that shape public policy directly and indirectly. And a set of political contribution rules allow unlimited expenditures for lobbying and campaign support for those with the wealth and the guidance on how to play the game.

This is the political headwind that progressive voices are forced to sail into. This is the headwind that the public interest is being buffeted by. Our future may rest on our ability to reprogram our system enough to give each voice equal weight, a reality we are currently far from realizing.