“History is written by the victors and framed according to the prejudices and bias existing on their side.” The origin of these words is given to many authors, all agreeing on the ability of those with power to distort reality.  And the victors in today’s political battles have taken this to heart and have wielded it and are, right before our eyes, making the most of it in an effort to cement their control and erase challenging and troubling facts and perspectives.

In Israel, this is playing out in real-time as a new school year begins and teachers are preparing and organizing the materials they think will support effective teaching. From a recent edition of Haaretz we can see how history has become politicized and weaponized. “The Tel Aviv-Jaffa municipality sent its schools maps (below) showing the Green Line, which was Israel’s pre-1967 border. But the Education Ministry told the municipality on Monday that it can’t use the map – ‘not even as a poster on the wall.’”

The maps (below) that are being challenged drew from the historical record and provide context to the complex nature the Israel/Palestine reality in 2022. “The kit it sent to schools contains three maps – a map of Tel Aviv-Jaffa; a map of Israel, the West Bank, and Gaza Strip that shows both the Green Line and Israel’s current political borders (which aren’t identical); and a map of the eastern Mediterranean Basin. The middle map also shows the areas transferred to Palestinian Authority control under the Oslo Accords. Arab schools received the same three maps in Arabic.”

By banning these maps and the history they illustrate the Israeli Government is trying to avoid the complex history of their country since it was established and carved out of the Palestinian landscape in 1948.  They hope to erase the reality of Palestine and the life experience of the millions of Palestinians they govern as non-citizens.

The “official “map (below), one that would be approved for use in schools, erases the existence of the Palestinian people and the ongoing dispute, to put it mildly, over control of the land and the lives of those living on it. 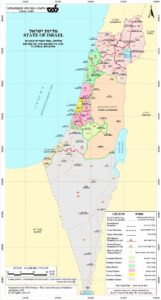 What’s at stake in this use of power to distort reality? Listen to two voices explaining why they want Tel Aviv’s schools to defy a national policy. Mayor Ron Huldaiwrote in a letter to school principals that “It’s important…that students know Israel’s sovereign borders and the complex reality in areas where Jewish citizens of Israel and Arabs under the Palestinian Authority’s control live side by side…”  Deputy Mayor Chen Arieli, via a twitter, added. “Boys and girls deserve to grow up with a realistic and uncensored realm.”

Even this map produced by the Trump Administration (below) which leaned heavily toward the policies of the Israeli government and ignored the Palestinian people would not pass muster with an Israeli government with a clear purpose in mind, controlling the past so it can ignore the difficult questions that they want to avoid confronting. 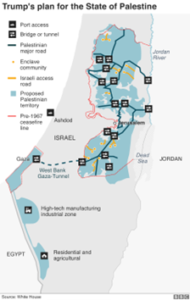 George Orwell, in his epic novel “1984”, gave us a chilling description of what will occur unless this power to edit is checked. His protagonist, Winston, has the job or editing the past so that it agrees with the present in the process of eliminating all of the difficult questions that history can raise. whose job it is to recraft the past a way that it does not raise questions and doubts describes his work in great detail. “As soon as all the corrections which happened to be necessary in any particular number of The Times had been assembled and collated, that number would be reprinted, the original copy destroyed, and the corrected copy placed on the files in its stead. This process of continuous alteration was applied not only to newspapers, but to books, periodicals, pamphlets, posters, leaflets, films, soundtracks, cartoons, photographs — to every kind of literature or documentation which might conceivably hold any political or ideological significance. Day by day and almost minute by minute the past was brought up to date. In this way every prediction made by the Party could be shown by documentary evidence to have been correct, nor was any item of news, or any expression of opinion, which conflicted with the needs of the moment, ever allowed to remain on record. All history was a palimpsest, scraped clean and reinscribed exactly as often as was necessary. In no case would it have been possible, once the deed was done, to prove that any falsification had taken place.”

History can be upsetting. It may not tell us a story that pleases us, a story that makes us feel we are who we think we are.  That may be its greatest upset that looking back with an open mind may cause may also be of great value in a democracy. It provides a needed context for how we will try to create our future. It provides a way to make sense of complex challenges that as citizens, we confront.

Arieli recognized this in comments reported by Haaretz, “Instead of censoring reality, the map allows it to be discussed,” Arieli said. “To raise active citizens, they have to understand the region – which includes the Green Line.” The map, she added, “will enable students to better understand the reality we live in; that should be in everyone’s interest.”

We can disagree about how we should go forward. But when we attempt to rewrite where we came from we have moved into the realm of tyranny.