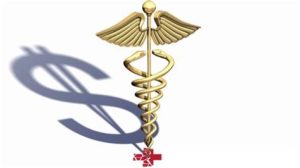 Just one week ago I came face to face with our nation’s health care system and saw why it is failing so many of us. 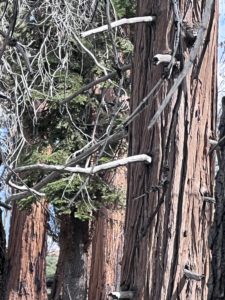 My wife and I were in the midst of a glorious week of hiking in Yosemite and Sequoia National Parks when she was bit by a parking lot.  Tripping over a curb while we were waiting to catch a shuttle bus back to our car she fell, and we learned later, broke her hip.  Park Rangers were quick to offer help.  And at that moment I began to see how a health care system based on the principles of the open marketplace, one that  presents  as James C. Capretta,Senior Fellow and Milton Friedman Chair at the American Enterprise Institute wrote,  “consumers with clear choices to get higher value care from providers who practice more efficiently than their competitors.”

Those choices and the associated cost implications began as soon as the Rangers arrived at my wife’s side.  Did we want them to call for their EMT to offer assistance? With my wife in pain, we of course said yes, please.  In just a few minutes the Park Service’s ambulance drove into the parking lot and we faced a second decision. Did we want them to transport us to the nearest hospital so the injuries could be assessed or did we want to drive ourselves out of the park?

For those who believe that the marketplace is the right control mechanism for managing medical costs and that competition will keep costs and prices down this is the first moment when we, as intelligent consumers should be acting. Should we have asked then for a price list for ambulance services so we could decide if my wife’s pain was worth the cost of ambulance services? Because we were in a cell phone dead zone, we could not call our insurer to find out if they would pay or share the cost so we were left to our own wisdom.

The choice we faced was to ride in the ambulance or move her into the shuttle bus so we get her back to a parking lot where we had left our car and then drive alone the 90 minutes to the nearest hospital down a challenging very curvy mountain road.  Is this a medical or an economic choice? In hindsight, knowing now that this was a broken hip needing surgery, our decision to use the ambulance seems obvious but not what market-based health care proponents might think.

Once we decided that she should be placed in the ambulance we then had to choose where to go. The EMT showed me a list of 7possible medical facilities they could head toward. On what basis should we, as competent customers have made that decision? Should we have asked the ambulance driver to stand by while we tried to make 7 calls asking for a price list of services for all of the possible things we might self-diagnose as the problem and then make another set of calls to track down with our insurance coverers what they would cover? Should we have just asked the EMT for their recommendation of where they thought the best and nearest facility was? We did the latter since my wife was in pain and we wanted to address that quickly and effectively.

And so, we ended up putting my wife in the ambulance and sending her off toward a hospital in Visalia, California.  I left her, retrieved our car, and headed down to the hospital to rejoin her. When I got there, she had, to my surprise,  not yet arrived. Turns out, unbeknownst to us, the National Park Service ambulance cannot transport outside of the Park itself, so my wife needed to be transferred to another, private service, ambulance for the final leg of the journey.  Should she have stopped there, asked for a price list for, this second ambulance leg, and decided about it on a cost basis? Should she have called me to bring our car and drive her on the final leg of her journey?

Once in the emergency room, we found out that my wife had broken her hip and would need surgery. Should we begin again to comparative shop about all of the neighboring hospitals’ charges for this procedure before we went ahead?  Or, as we did, should we just assure ourselves that we had faith in the medical staff that we were then working with and move forward expediently to resolve the problem, avoid any risk of further damage, and limit the hours of pain?

We chose to stay where we were and go forward.

After the needed surgery was done, as we moved from treatment to the care needed for proper healing a number of other parts of a treatment team appeared. Should we be asking each of them, the physical therapists, the folks who supply the needed adaptive equipment. for their price lists before we moved forward with each step of the recovery before each act happened?

A week later, as I write this, we have relocated to Encinitas, California, so we could be nearer family. We have had to locate a source for the needed physical therapy services and follow-up orthopedic medical care for the weeks we will be in California. At each stage, we are dealing with the advice of my wife’s care team and the choices of how to follow through.

We are fortunate that my wife is old enough to have Medicare as our primary insurer. We are even more fortunate that we are economically privileged and are able to afford a comprehensive supplemental policy and separate drug coverage. Because of our privilege, most of the immediate cost issues are covered.

Yet even with that high and expensive level of insurance buffering for us, we have faced not insignificant out-of-pocket costs. The medications that my wife requires over the first month of recovery have already cost us more than $200;  consider that number in the context of a national population the Federal Reserve claimed in “a May 2022 report based on data from late 2021… that 68% of Americans could cover a $400 emergency expense using cash or its equivalent. For example, some people said they could pay that sort of bill by swiping a credit card but paying its balance in full when its statement arrived. Of course, the bad news is that 32% of Americans clearly couldn’t cover a $400 emergency using cash or its equivalent as of late last year. “

Our current approach to medical care treats it like another commodity to be purchased. Its availability at every step is based on a complex network of public and private insurance plans augmented by acts of kindness (i.e., philanthropy) for those least able to pay the cost of services. It assumes that every person at every moment can assess their individual situation and make wise decisions, wise for their own medical and economic needs and wise for the overall health care system. 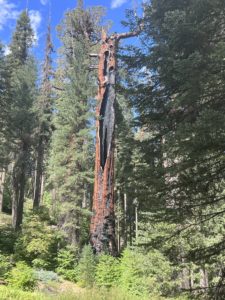 One moment, one slip amidst the grandeur of the sequoia forests has shown me that this patchwork can work if you can afford it and will fail if you do not.

Seeing healthcare as a commodity ignores the reality of the moment that decisions are being made.  It places an unreasonable expectation on the person at risk to be able to act super rationally in a moment of crisis, to forget the fear and emotions of that moment, and consider the situation as one might consider choosing where to buy the week’s groceries.  And it ensures that it will be available based on economic status, leaving so many of us outside of that small circle of privilege.