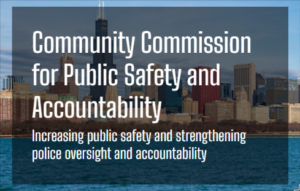 Last week I learned a very personal lesson about how hard it is to reform entrenched systems, even those which do great harm.

The Chicago Police Department has a sordid history of racism and violence that has destroyed too many Black and Brown lives and has made the work of building safe and healthy communities hard. More than 2 years ago the City of Chicago established the  Community Commission for Public Safety and Accountability, to give the city’s residents a powerful voice in the leadership of their Police Department.  The Commission’s formation was the result of years of grassroots advocacy spearheaded by the Grassroots Alliance for Police Accountability (GAPA) and the Civilian Police Accountability Council(CPAC), collaboratives that were committed to bringing an out-of-control Police Department under civilian, citizen control. They fought and won an uphill struggle against a powerful police union and an entrenched political structure led by Mayor Lori Lightfoot that did not want to cede any of its power and see real change occur. For a moment it seemed that the voice of the people had prevailed.

The City of Chicago created

Those of us who had worked for its creation smiled, thinking we had set a national standard for community control of a metropolitan police force.

In August of this year, and only after the Mayor could drag her feet no longer, the seven members of the Commission were finally in place and could fulfill their mission,

As important as the establishment of the Commission might be we are now painfully learning that the battle to reach this point is not over. It may have been only the beginning.

Last Monday evening as the Commission met to discuss the Police Department’s desire to continue, with some modification, its infamous “gang database,” a list of people identified as members of a street gang and, therefore, suspect of criminal activity. The new database policies that the CPD was close to finalizing, they said, would resolve the glaring problems in the CPD’s current system, problems which had been outed with great embarrassment in 2018.

At that time a ProPublica investigation told the community that the CPD had labeled 128,137 people as gang members in a system that had little oversight, little quality control, and questionable accuracy. And ProPublica’s analysis demonstrated how racially biased this system was, “ nearly everyone in the database is a person of color: 70 percent are African-American and 25 percent are Hispanic.” Biased as it was, this “data base” was used by CPD and shared with numerous other bodies outside of the Police Department. For individuals, whose names were included the harm was real:  police harassment, arrest and false imprisonment and loss of jobs.

Shortly after this report was published, Chicago’s Inspector General’s office conducted its own review of the existing system and concluded that: “ 1) CPD lacks sufficient controls for generating, maintaining, and sharing gang-related data; 2) CPD’s gang information practices lack procedural fairness protections; 3) CPD’s gang designations raise significant data quality concerns; and 4) CPD’s practices and lack of transparency regarding its gang designations strain police-community relations. “ The OIG made a number of recommendations for improvement beginning with suggesting the Department  “evaluate, in partnership with stakeholders, whether collecting, maintaining, sharing, and using gang information best serves violence reduction efforts in the city, including with consideration of the collateral consequences of these practices.”

CPD received this criticism with little overt objection and said it would take corrective action, including developing a new and improved data management system; but it would continue the current flawed system while it was working to replace the existing flawed effort.

Without a body like the Community Commission, CPD had little external oversight and so two years later it was not surprising to learn that the Inspector General had revisited the issue and found that “ CPD has made minimal progress…CPD has not clearly and specifically articulated the strategic value.”

To do that they played on the semantics of the Commission’s charter. GENERAL orders needed Commission approval but SPECIAL orders do not, so the system that was being developed miraculously became a special order! The Commission protested and last Monday evening representatives of CPD and of the Inspector General’s Office appeared before the Commission in a meeting attended (online) by hundreds of Chicago citizens.

Discussion that evening found a Police Department that took little responsibility for the harm that it had done previously. They were proud that they had culled the existing database down to a list of fewer than 2,000 names without ever explaining how they had kept the larger (and inaccurate) list in play. Nor did they indicate how they would redress the harm of what they had done.

The new system was presented with a “trust us” attitude, “we’ve learned our lesson.”  But it still had no external oversight to ensure that it was error-free and that the rights of the people were protected. It was still a system that allowed a person to be labeled a gang member without notice and presentation of the evidence that CPD was relying on to make that designation. They were presenting a system whose appeals process to be removed from the list was complex and difficult to access.

Their “you can trust us” attitude was best illustrated by the response to a question about how they would be fixing a department whose officers displayed blatant bias and racism in the records of the current database; in the IG’s review it was discovered that “…some entries in the “gang database” raise serious concerns about how CPD officers perceive and treat the people with whom they interact. OIG found that CPD officers entered occupations for individuals on gang arrest cards that included “SCUM BAG,” ‘BUM,’ ‘CRIMINAL,’ ‘BLACK,’ ‘DORK,’ ‘LOOSER [sic],’ and ‘TURD.’ Such entries demonstrate CPD’s lack of controls around its data entry practices and how such information systems can be employed to demean and dehumanize members of the public.” CPD’s cure was to trust them to do better training.

And, perhaps most critically, they could still not articulate a clear reason that this system was needed to effectively police the city.

So, because the Commission is in existence, a public hearing could be called to examine the new gang database. Members of the community could voice their concerns and air their distrust of CPD. Members of the Commission could raise the important questions of why this was needed and why the Department should be trusted with such a dangerous tool.

But it still remains unclear whether all of this is more than talk. If CPD stands behind its ability to designate harmful policies as outside the purview of the Commission and if the mayor supports them in this bureaucratic game, the Commission will be shown to be powerless.

The importance of this is more than just a Chicago political dispute.

For the reformers who worked hard to educate the public about the need for civilian oversight of policing and for the tens of thousands of citizens who stood behind them over many years, this will be a cold slap in the face. If the Commission’s creation were a sign that change could happen, trust could be rebuilt and safety improved through the democratic process that slap goes well beyond just losing on one issue. It demonstrates how difficult reform is. It risks disconnecting government from the people.