A story in Monday’s Washington Post told a familiar story. For those with wealth and power talking about the need for systemic change is easy but doesn’t mean that anything will change.

In the wake of George Floyd’s murder at the hands of members of the Minneapolis Police Force our nation was forced to again confront the painful reality of its deeply embedded racism. As protests filled streets from coast to coast it seemed we were finally ready to begin a long-awaited period of national introspection and ready to commit to taking real action.

The Post’s Tracy Jan, Jena McGregor, and Meghan Hoyer remind us that Corporate America had been loud and proud in telling us that they had seen the light and were ready to change.  “From Silicon Valley to Wall Street, companies proclaimed “Black lives matter.” JPMorgan Chase CEO Jamie Dimon adopted the posture of former NFL quarterback Colin Kaepernick’s protests against police brutality and took a knee with bank employees.”

They went further, pledging to put their money behind their words. They said they were ready to invest in efforts to address systemic racism.  And they took great pride in announcing their “pledges” to support the wave of protest for change with their wealth and power. From the Post’s reporting we learn that “America’s 50 biggest public companies and their foundations collectively committed at least $49.5 billion” to erasing racism.

Does it surprise you to see that less than 10%, $4.2 Billion, came in the form of donations to organizations working in the trenches, doing the hard work of addressing the human reality of racism? And that these commitments are “to be disbursed over as long as a decade in some cases, represents less than 1 percent of the $525.6 billion in net income earned by the 50 companies in the most recent year, according to data from S&P Global Market Intelligence.”

Even if these funds were all put into play in just one year, they are less spectacular when you consider how much money large corporations make annually. In 2020, a year challenged by the impact of COVID-19, the 50 most profitable corporations reported earnings of more than $700 billion!  Or when we see, as recently reported by the Institute for Policy Studies, that “America’s billionaires have grown $1.8 trillion richer during the pandemic, their collective fortune skyrocketing by nearly two-thirds (62%) from just short of $3 trillion at the start of the COVID crisis on March 18, 2020, to $4.8 trillion on Aug. 17 of this year, according to a report from Americans for Tax Fairness (ATF) and the Institute for Policy Studies Program on Inequality (IPS). [A table of the top 15 billionaires is below and the full data set is here.] 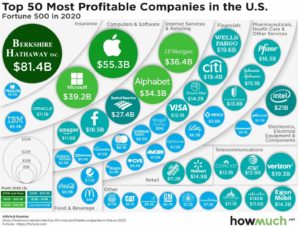 This is moment  when we are not only able to see the problems, but when we can see that many of the efforts that we have tried over the decades that have passed since Dr. King told us of his dream have not been effective. So why should we expect corporate leaders to see the need to break away from tried and true, safe, and uncontroversial.? Why should we expect them to embrace the controversy that comes with deep change?

Corporations wanted a path that would have them seen as doing the right thing, get the publicity they wanted, not be too controversial, and still make a profit.

The loans, investments, and other initiatives that will make up the balance are more business-like than they are charitable. Businesses said that they could modify their business practices to address longstanding issues that are the legacy of our racist roots. Banks committed to making loans to expand black and brown homeownership. Corporations committed to depositing their cash in Black-owned banks to strengthen their balance sheets and give them greater ability to serve their communities.

But is this more than moving the chairs on the deck as the Titanic sinks?

Changing business practices to make real change requires more risk than corporations may wish to take. Mortgage loans targeted at communities of color and not buyers of color may seem to be changing the homeownership and wealth imbalance,  but will they? “Civil rights experts say that could have the unintended effect of further increasing gentrification and displacement. ‘If the problem that JPMorgan

Chase is trying to solve is the wealth gap between Blacks and Whites, then they need to know their strategy in Minneapolis might not get us where we need to go,’ said Samuel L. Myers Jr., an economist at the University of Minnesota”

Making donations to organizations that are now working to tear down the root causes of racism may be too risky. In the heat of the moment, Cisco CEO Chuck Robbins, whose company had a gross profit of  $31.894 Billion for the last year, was ready to tweet “We need ACTION to eradicate racism, inequality, and injustice…” and pledging that his company “would be donating $5 million to a handful of racial justice groups, including Black Lives Matter.”  But when it came to action, he saw more traditional ways to make such a small donation. “…a year later, the company has yet to donate to Black Lives Matter. ‘After further consideration and assessing where we’d have the biggest impact, Cisco committed funding to several social justice organizations including NAACP Legal Defense Fund and Equal Justice Initiative’, Shari Slate, Cisco’s chief inclusion and collaboration officer, said in a written statement.”

Charles Long, who helps oversee fundraising at Movement for Black Lives identified the change needed within the corporations if they are to become part of the solution in comments reported by the Washington Post. “Many of these companies pledging to give money to racial justice efforts exploit Black workers and extract wealth from Black communities, which goes directly into the pockets of their wealthy stakeholders.”

Whether the channel is philanthropy or investment we are still confronted by the difficulty of trusting decisions being made within flayed systems. If Corporations wish to be part of the solution the very nature of how they are managed, how decisions are made, and who advises them on the risks they can take needs to be examined. Small changes, small investments and donations can earn them mainstream media headlines and help them seem to be on the right side of history, but they may not do very much.

Treading this “safe” path may not get us the change it claims to be bringing. More likely we will be back at the same place, confronted (even “shocked) by how deep our national racism remains as we were as Mr. Floyd lay pleading for his life under a policeman’s knee.