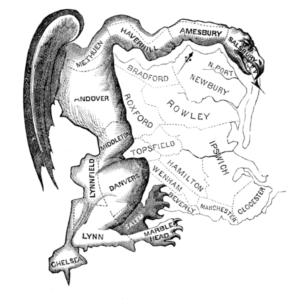 With the release of the 2020 Census data, a frenetic process of re-drawing legislative district boundaries has begun across the nation.  Because the census totals determine the number of representatives each state will have in the U.S. House of Representatives, for some states this was a good news/bad news announcement.  It was not, however, a surprise.  The winners were Montana, Oregon, Colorado, North Carolina, and Florida, each gaining one additional seat and Texas gaining two seats.  States losing seats (only one each) include New York, Michigan, Pennsylvania, Ohio, Illinois, West Virginia, and California. But whether or not the number of seats changed in a state, the census numbers may change the way in which a state draws the boundaries for state as well as its federal voting districts. States are Constitutionally charged with re-drawing legislative districts every 10 years whether or not their number of representatives change.  They all must take a hard look at how their districts are drawn, who gets to draw them and which voters will be contained within them. As you look from state to state, this process is both contentious and confusing.

In these times, as we watch state legislatures pass oppressive voter suppression bills that are being gleefully signed into law by Republican governors and then almost immediately taken to court by groups hoping to stop their implementation, mapping new voting districts may sound quite tame. But the reality is that redistricting or gerrymandering as it is known when it becomes based on constituency or politics is anything but tame.  In some cases, it can be downright nasty. It is about control and power and that is not something to snooze over.

The lovely drawing/political cartoon that is used in this article is of “The Gerry-Mander.” It was drawn in 1812 to depict the district created by the Massachusetts legislature to favor the incumbent Democratic-Republican party candidates over the Federalists.  When then Governor Elbridge Gerry signed the Senate district map into law, according to the Encyclopedia Britannica, it consolidated the Federalist Party vote into a few districts. The word Gerrymander was thus coined, and the rest is history!  A new means of controlling your political opposition was born.

With the release of the 2020 Census numbers, and the mandate from the U.S. Constitution that Congressional Representation is apportioned to states based on population (Article I, Section 2.), each state must now look at how their Congressional districts are drawn to ensure that they are fairly equal in terms of numbers of people (based on a Supreme Court ruling in 1964, Wesberry v. Sanders). If there have been population shifts within states, or migrations out of states, congressional boundaries will need to be re-drawn.  Why is this important?  The issue of voting rights seems to integrate itself into every conversation these days.  This is one in which it truly belongs.  The ways in which states redistrict, whether they gain seats or lose them, can make a huge difference at both the federal and the state legislative level.  Who controls the legislature can be the difference between policies that support all people in a state (or our nation for that matter), or policies that focus on a smaller, more elite segment of the population.

However states choose to redistrict and whichever party holds sway in the state legislature, there will be controversy and disagreement as they sort our just where to draw the lines for both Congressional and state districts.  Separating issues of partisan politics and racism when setting up voting districts is not for the faint of heart.  More than once has the issue of Gerrymandering landed in the lap of the Supreme Court. Their decisions have, in some ways, left us with more questions than answers.

In May of 2017, in the case of Cooper v. Harris, the Supreme Court determined that gerrymandering, based on race was unconstitutional. This was based on a case from North Carolina, and it was not that state’s first dance at the Court on this issue.  In this ruling, the Court felt that too much emphasis was put on jamming Black voters into a limited number of districts (known as “packing”), thus lessening their voting power and influence in other districts in the state.  The arguments brought to the Court in defense of the North Carolina maps were that they were drawn with politics, not race, in mind. That process, known as “cracking” divides registered voters of one party among several districts to dilute their voting power, which was not what happened in this incidence in North Carolina, although it has happened elsewhere.  In writing about this case for Nonprofit Quarterly, the blurriness between political and racial gerrymandering is front and center:  The issue of distinguishing between race and political party can be blurred in the Court’s findings in this and other cases of gerrymandering. The drawing of political districts by the party in power in a state brings the assumption that party will play a large role and be an accepted factor. A state has leeway in this area. But when race and party are “conjoined,” deciding as to what is or is not constitutional becomes a conundrum.

But the conundrum continues, and the Supreme Court has only added to the confusion with its decision this year in Brnovich v. DNC delivered on the final day of this year’s session.  This was the Arizona voting rights case in which the Court upheld (6 to 3) two different voter suppression laws (one disallowing ballots mistakenly cast in the wrong precinct and the other keeping third parties from collecting and returning mail-in ballots).  Both laws disproportionately impacted minority and indigenous populations in Arizona. The conservative Justices said was not so. They felt that the state had the right and obligation to look at these issues holistically for the entire state and not at how certain areas were impacted by these laws. Applying this kind of logic to redistricting, may be to the advantage of the party in power.  And they will have the support of a Supreme Court ruling to back them up.

But what we are seeing and experiencing now as our states move to re-draw the maps for both federal and state voting districts, and even for city council seats and aldermanic districts in counties and cities, should frighten and concern everyone.  This is not a simple power grab.  This is an effort on the part of legislators, on both sides of the aisle, to entrench their parties and people in place in perpetuity. The kinds of lines that are being drawn would disenfranchise people of color, not just for the next 10 years, but possibly for even longer, if courts uphold these maps.  And what is frightening, is that it is likely, given the shift in the make-up and politicization of our federal courts over the last four years, those maps will be upheld.  Writing in Slate, Mark Joseph Stern, pointed to the Florida State Supreme Court that is now dominated by appointees of Governor DeSantis.  Stern notes that “ DeSantis has suggested that he appointed justices who will trash their predecessors’ liberal legacy and toe the line on gerrymandering. Federalist Society judges, like the GOP, tend to despise judicial intervention in redistricting, seeing it as an affront to state legislatures’ constitutional authority. DeSantis seems to have done everything in his power to ensure that the Florida Supreme Court’s far-right bloc shares this view.” And Florida is but one example.

The 2020 Census told us that our nation is changing.  It told us that we are less white and more diverse.  It told us that we are more urban, and less rural and suburban.  It told us that our numbers of younger people are shrinking but they are more diverse.  It told us that 2/5 of our population (approximately 40%) identify as People of Color (POC).  As our mostly very white legislatures prepare to draw maps to redistrict so that voting districts will be proportionate and representative, there are some questions to be asked.  The Supreme Court has ruled that racial, but not political gerrymandering is unconstitutional. But they have also, for the most part, kicked the gerrymandering can back to state legislatures to grapple with. And both political parties play this gerrymandering game.  So, who will be the loser in this?  As we look at the changes in our population, and who makes up our nation according to the Census and who makes up our leadership when we look at our state and federal elected officials, is there at match… or a disconnect?  In drawing new maps to determine who can fill these important elected seats, perhaps it is time that we stand up against the gerrymander monster and do more to have maps that truly reflect who we really are. It may take a revolution… but that is how this nation was founded.