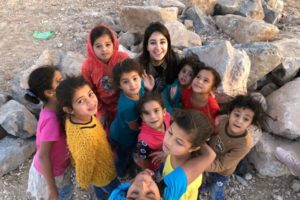 Sometimes this nation says one thing and does another. We like to do what is noble.  At  a particular moment in time, for a particular group of people we open our arms But then we find reasons to reverse those noble actions for another, similarly burdened and oppressed group. We only need to look at our efforts to support the extraction and immigration of Afghan families that have aided and worked with the U.S. during the last 20 years and bring them to safety and resettlement in the United States.  U.S. citizens are rushing to help agencies and organizations in this effort, asking about what is needed and how can people contribute. But reflect a moment on what is happening to other immigrants who are congregating at our southern border, seeking asylum in the United States. Both they and the Afghanis are foreigners fleeing their home countries in fear of their lives. And yet for one group we are welcoming with open arms and the other, we are often disparaging, and turning them away.

The argument might be made that we “owe” something to these Afghani families. We are the reason they live in fear for their lives so now we must make good on promises that we will take care of them.  That seems reasonable.  But if you look at the reasons for those who now congregate at our southern boarders seeking refuge, you may also find a trail of U.S. interventions and failures in their home nation’s politics that have left them, usually the poorest and least educated at the mercy of warlords, drug dealers and gangs.  It might sound a bit similar to Afghan and the Taliban (only in a different language) and it played out under the radar as we never sent large numbers of U.S. troops to these nations.  We  do not  have the same empathy and concern for these refugees largely from Honduras, Guatemala and El Salvador. although they are driven to leave their countries, according to the Council on Foreign Relations, largely by the same issues as in Afghanistan: lack of economic opportunity, environmental challenges, and chronic violence.

What is frustrating in all of this is that our own U.S. immigration policies are the stumbling blocks that get in the way of our being able to “do the right thing” for any immigrant group, no matter how deserving.  You may recall the outrage when prior to this withdrawal from Afghanistan, President Biden planned to keep the number of immigrants admitted to the U.S. at the same level as under the Trump administration.  That number was a paltry 15,000.  The howls from constituents and his party forced a change to 62,500 for fiscal 2021.  But, according to Aline Barros, writing for Voice Of America News, the U.S. will “probably” accept fewer than 10,000 refugees by the end of September.

Our own policies and protocols will get in the way. “It is too late for any sort of processing,” Sunil Varghese, policy director for the International Refugee Assistance Project, told VOA in describing the plight of Afghans seeking approval of their applications amid the chaos and violence surrounding the international airport in Kabul.  The complicated system of laws and processing for asylum seekers in the U.S. require special visas that can take months, even years to obtain.  There are more than 300,000 Afghan civilians that have aided the U.S. in its work and mission over the last 20 years.  This will not be easy, and these numbers far exceed our numbers of planned asylum admissions.

There is one option that could be used, however. It is called “humanitarian parole” according to Stephen Yale-Loehr, an immigration law professor at Cornell University who explained “Humanitarian parole is used to bring someone who is not otherwise eligible to enter the country, or who does not have a visa, into the United States temporarily because of an emergency or urgent humanitarian reason.” Although a bipartisan group of 46 U.S. senators urged the administration to use this humanitarian relief, it is unknown if Biden officials will heed their pleas.

No matter what, there will be winners and losers among those seeking to escape the new regime in Afghanistan.  Some will get out of the country, but may not be re-settled in the U.S.  Some may not get out at all, and their fates will be uncertain at best. But uncertain is also the word for those who congregate at our borders with Mexico and seek asylum in the U.S. on similar humanitarian grounds as do the Afghanis.  Just this week, a federal judge (a Trump appointee) ordered the re-instatement of the “Remain in Mexico” policy for all seeking asylum in the U.S.  This was in response to litigation from the states of Texas and Missouri requesting that this law that had been suspended for almost 17 months, be immediately reinstated.  And, without hearing any arguments or receiving any input from interested parties, the Supreme Court  upheld this single judge’s decision, in effect handing foreign policy and immigration decisions to the courts, rather than to the Executive Branch.  The decision was 6 to 3 (conservative to liberal).  This was a total reversal of all of the similar decisions made when Trump was President, ignores precedent, and leaves many scratching our heads in terms of the Court’s claim of being nonpartisan. It also leaves us with a growing immigration and possible foreign policy crisis at our southern border with Mexico. And it leaves thousands of asylum seekers facing relocation back to the dangerous conditions outside our borders. The instability of the three nations in the Northern Triangle of Central America does not bode well for the border crisis that now looms larger for the Biden administration. Violence is rampant in these nations with murder rates that are among the world’s highest. This may be attributed to decades of civil war and political instability that has led to the system of criminal activity that now functions throughout the region.  And the increase in women fleeing these nations may be attributed to the high rates of femicide, with El Salvador and Honduras having the highest rates in Latin America in 2019. Add to this the government corruption that has been a showcase of two-steps forward in fighting corruption and then three steps back.  It seems that no matter what is put in place, or by what entity (the U.S. or the Organization of American States- OAS), it does not last in this part of the world.  And the people leaving their homes and land to seek refuge in the U.S. have literally no other options for safety and opportunity.

So where is our concern and empathy for these refugees?

This leaves us with a problem. If we say we care about immigration and immigrants and we should be diligent in rescuing the Afghans who are in danger and who helped Americans over the last 20 years, should we not be applying the same standards to those who seek asylum at our southern borders? Are they not also in danger?  Do they not also contribute to our society? If we send them back to their home countries, or we leave the Afghanis behind, are we not sentencing them to death or hardship?  A Pew Research Center analysis concluded that two-thirds of Americans “support taking in refugees fleeing war or violence.”  One might wonder if that number includes those at our southern border.  It seems as though we want to be able to pick and choose who we admit and who we send back to perish in their home countries.  If we are truly going to be that welcoming land that our Statue of Liberty proclaims we are, we cannot discriminate.  Does that make you uncomfortable? Are we not quite that good?