The hope that this time would be different and that long-awaited significant systemic change would emerge from the hard-fought 2020 election is quickly fading. The negotiations now underway in Congress and the White House over the fate of the Build Back Better plan are a sign of how far away we really are from addressing our most pressing problems and the structural inequities that plague our nation. That these negotiations are even necessary are indications that the power of the wealthy and corporate special interests have not been checked. The voice of the people appears to be too soft to be heard.

WE KNOW WHAT THE PEOPLE WANT

A survey commissioned by Real Recovery Now, Invest in America, and Dat0a for Progress again found that there is support for sweeping change. “While investments in physical infrastructure are very popular with voters, we ﬁnd that likely voters see policies contained in the Build Back Better Plan, including expanding Medicare beneﬁts, investing in long-term care, and raising taxes on the wealthy, as the most important elements of the Biden agenda. Speciﬁcally, 76% of voters see a provision of the Build Back Better plan as their top priority within Biden’s agenda.” Nothing is new here, just one more survey telling us that what Congress is giving up on is very mainstream ideas for improving this country and the lives of millions of its residents. 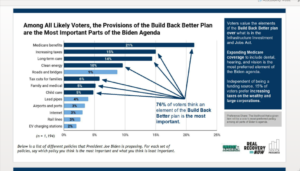 And there is widespread concern, as shown in a recent Pew study, about the fairness of our tax system. As Newsweek summarized these findings, “Eighty percent of Americans said the feeling that some corporations and wealthy people don’t pay their “fair share” of taxes is a significant bother to them, with 59 percent of recently surveyed U.S. adults saying it bothers them ‘a lot’. Only a tiny, single-digit percentage of Americans said they are not at all bothered that top-tier corporations and some wealthy individuals pay too little in taxes each year…” 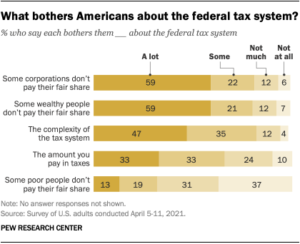 The Biden Administration and the surging progressive wing of the Democratic party came into office last January with a clear agenda to respond. What emerged were two bills, the Bipartisan Infrastructure Bill that contained investments in the nation’s physical infrastructure and the Build Back Better bill which contained the social policy/safety net improvements so sorely needed. Adjustments to the tax code were also included to address the wealth gap.

THE VOICES OF THE RICH AND THE PRIVILEGED SPEAK LOUDLY

A month ago the Washington Post described the forces massing in opposition. “The emerging opposition appears to be vast, spanning drug manufacturers, big banks, tech titans, major retailers, and oil-and-gas giants…started strategizing behind the scenes, seeking to scuttle key elements in Democrats’ proposed overhaul to federal health care, education, and safety net programs. Among the most active is the U.S. Chamber of Commerce, which is starting to put together an economy-wide coalition to coordinate the fight against the still forming economic package…the group has been in talks with potential allies such as the National Association of Manufacturers, whose board includes executives from firms such as Dow Inc., Exxon, Caterpillar, and Johnson & Johnson…Other opponents include the Business Roundtable, whose board counts the chief executives from Apple and Walmart…. And the pharmaceutical industry has embarked on its own wide-ranging campaign to combat Democrats’ drug pricing proposals…”

With funds to invest in lobbyists and with money to donate to political campaigns these special interests have been able to steer the debate away from the changes that are popular to a smaller and smaller agenda that promises to leave many behind. It is a replay of the game plan that turned the desire to bring medical care to everyone at the beginning of the Obama presidency into the much more limited reality of the Affordable Care Act that left many out and protected profits at their expense.

COST RATHER THAN VALUE – THE DEBATE THAT BECOMES A  KILLER

Those who are standing in the way of action, Republican and Democrat,  have a common mantra to mask their opposition to real change, change that will affect their wealth and power. “It’s too expensive, we just can’t afford the cost.”  Senator Joe Manchin released a statement last week that could be named the spokesperson for these obstructionists. “I can’t support $3.5 trillion more in spending when we have already spent $5.4 trillion since last March. At some point, all of us, regardless of party, must ask the simple question — how much is enough?”

As the legislative process has moved forward, it has lost any sense of real perspective of what consideration these proposals actually cost,  and of the ways that the tax code can be fairer and bring more revenue in to offset that cost.

What does the $3.5 billion price tag that was attached to the Build Back Better proposal, a number that is flaunted as SO expensive, represent?  As Paul Krugman, writing in the NY Times, recently pointed out that the answer is not what those screaming it is too expensive, want us to believe.  “$3.5 trillion…proposed spending over the course of a decade, not a single year. It would amount to little more than 1 percent of gross domestic product over that period and would still leave overall government spending far below its level in other wealthy democracies. It also ignores the fact that the true cost, after net savings and new revenue, would be much less than $3.5 trillion.”

To put the top-line cost of $3.5 over a decade in further perspective consider that the Defense Department’s budget that was recently approved by a 316-113 bipartisan vote the House of Representatives.  With no shrieking about it being too expensive or about how could pay for it were happy to send to the Senate a bill that will cost twice as much as Build Back Better,  $7.68 billion over the same ten years. The Senate Armed Services Committee, of which Senator Manchin is a member,  went even further, approving in a 23-3 bipartisan vote an even larger Defense budget than the House’s version. Again, the debate did not question how we were going to pay for it. Nowhere in the debate over funding, our military was the same questions raised. Senator Manchin was not heard to ask, “how much is enough?”

As I write this, it seems clear that there will be little, if any, change.

The opponents have already won when the debate is allowed to focus on which program, and which need makes it under the lowest possible target number. That is what we are seeing now as Democratic Rep. Ron Kind (D-WIS.), a member of the  New Democrat Caucus, recommended in a piece he published in the Hill,  “We need to limit the number of programs included in the legislation in order to fund them properly and ensure their stability well into the future.” That recommendation came with no mention of any of the Tax Code changes that could address the size of the overall agenda and make the needed programs affordable.

We know whose interests are now being heard in this concerted effort, successful up to now, to control the nature of the dialogue.

We now see a government enmeshed in a debate over that top-line budget number. Lost entirely is a needed consideration of how we should be ensuring that every person and every corporation is paying their fair share. Lost is a discussion of whether the IRS should be enabled to collect all of the taxes owed under existing regulations; an important consideration in light of the estimated $1 trillion that remains unpaid every year. Lost is a discussion of the loopholes in our existing tax system that allow the wealthiest among us to avoid paying like the rest of do. And lost is the discussion of whether the wealthiest should pay at higher rates.

Progressive voices have given up the fight, accepting that they cannot succeed. Democratic Congressperson Alexandra Ocasio Cortez accepted the need for compromise and offered the option in a Face the Nation Interview last Sunday suggesting funding programs for a limited number of years in order to bring the top-line number down was. “One way to meet in the middle…fully fund what we can fully fund and suggests scaling back the timetable on how long some programs can be funded for.”

Democratic ”centrists” have the top-line perspective, looking only at budget numbers with no additional revenue, is so strong that even AOC’s view of compromise might not be enough. Their own Representative Ed Case made this very clear when he told The Hill  “The idea that we would enact a whole bunch of programs and sunset them after two years, three years, four years, to me that’s just budget gimmickry. That’s not solid budgeting, that’s not solid policy, that’s deceptive. And it’s basically completely designed to avoid the hard decisions that now face us, which is to choose among an array of worthy initiatives the ones that will truly benefit the people that most need help.”

As the effort to find some way to pass some bill goes on, the political influence of the wealthy and large corporate interests has again proved to be stronger than the voice of the people. If all that results from the hard electoral work that put a Democrat in the White House and gave Democrats control of both houses of Congress, as slight as it is,  is another modest, incremental set of programs that does not change the economic landscape that traps so many Americans, I fear that the future is even darker. Those who struggled to vote will learn that that struggle brings little change. And we will pay the price as they lose faith in this nation.