In the last months, Carole and  I have driven across the country. From Chicago to Salt Lake City (UT) to Encinitas (CA) to Albuquerque (NM) back to Chicago and then east to South Setauket (NY) before returning home to Chicago. We drove more than three thousand miles that passed through seventeen states. This was a trip planned to finally catch up with family and friends that had been cut off from us by the pandemic. When we planned to hit the road the worst of COVID  seemed to be behind us, but we were wrong about that. The Delta-variant had arrived and sent infections spiraling. We were again faced with the challenge of taking precautions to avoid getting ill and to prevent us from becoming spreaders.

But we saw we were often alone in our caution and concern. We saw why this disease has been so hard to get under control as common sense has been overrun by political game playing. In gas stations, rest stops, and the few motels we stayed in, wearing a mask was still more than most people could be bothered with. Somehow the news that we were approaching 750,000 COVID-related deaths and the news of packed hospitals turning away patients was not enough to overcome the loud voices telling them that this was all a mirage. Despite all the lost lives, so many people seemed unwilling to change their behavior and do a simple thing like wearing a face cover. Typical was the evening in Laramie, Wyoming when we entered, masked, a restaurant to pick up our dinner to be gawked at by the cashier and tables full of patrons, all unmasked, shocked to see us with our faces covered.

Wearing a mask is a simple act. As we traveled, I focused on this as my barometer and saw it falling. Is it too much to ask if it can be a small bit helpful in lessening the spread of COVID? The months of propaganda that have flowed from too many Republican politicians and conservative media figures have been more effective than all the public health advice in convincing many to conclude it is. Taking care of others and protecting those at risk have become secondary to personal prerogative. Wearing a mask, a simple act that requires little of the wearer has been cast as a major imposition on rights and dignity.

And in the face of this onslaught, leaders have too often backed away, putting their political careers in front of the lives of those they serve.

When we were in Wyoming in August as the state was experiencing a rapid surge in infections, hospitalization, and deaths. Laramie, where we were gawked at by a restaurant full of unmasked diners and employees, had the state’s highest infection rate. But the State’s Governor, Mark Gordon would not tell them they had to do more to protect everyone. At a press conference, as reported by the AP, he told his constituency that “the issue is not masking, the issue is COVID. Here’s the thing: We already know what to do. We’ve been through this before. We know that there’s value to masks and we recommend those masks. We also know people have very strong concerns about masks.” Rather than lead, he was content to prioritize ill-informed decisions over action that would save lives. He walked away, mouthing pious words, and allowed people to make choices that risked the lives of others. 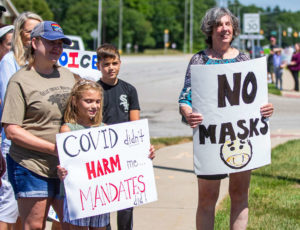 At a rest stop in Ohio, I spotted two signs on the entrance door. They were warnings about health and safety, but somehow COVID-19 prevention was not important enough to even hint at actions that would help. You could not come inside if you were not wearing a shirt or shoes. You could not bring your cigarette or your pet inside either. But no mention of the pandemic and the need to be masked when entering. 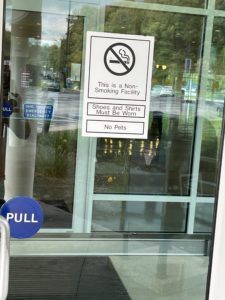 Ohio’s state’s mask mandate had ended in June before Delta was upon us. And even in a state with a Governor who would act aggressively, further action was blocked by a Republican-dominated state legislature that had passed legislation taking that power away from the Governor and state health officials. Even as Ohio’s Covid Positivity rate ranked 13th highest in the nation, leaders would not lead, just deceive and watch as their friends and neighbors got sick and died.

Wyoming and Pennsylvania are not outliers. They represent the reality we saw on our travels. Of the seventeen states we touched, only four have leaders who had the strength to enact mask mandates. Of these, 11 currently rank among the 25 states with the highest infection rates and 6 states have high death rates. 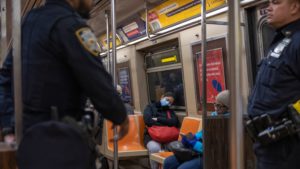 Returning Home to Chicago to see the city struggling to get its employees to follow Public Health Guidelines that protect those they serve. On a protest march not one of the Chicago assigned to manage the event was masked (while every one of the protesters was!) And this week, as many as one-third of the Police force is willing to risk being fired rather than share their vaccination status with the city. In New York, as reported by NBC News, the ”largest police union told its members in an email that it would take legal action to defend their “right to make such personal medical decisions” if they faced the same requirement.”

We are now victims of two viruses. COVID-19 and deceit. COVID, we have a medical and behavioral step we can enact that can make a difference. But deceit seems unstoppable. It moves people to act in ways that put themselves and those they love at risk. It poses a false choice between freedom and health. And unfortunately, deceit continues to spread and strengthen.