In this time of heated political division, it is too easy and too common to for advocates and their organizations to claim to be speaking in your name even when they are advocating positions and policies with which you don’t agree. Claiming to represent an entire group or community gives credibility, influence, and access. Because it is easier to make a claim than organize those that you say you represent, it has become so common it even has a name –  “astroturfing.”

I am an advocate for the rights of the Palestinian people and one who is ready to challenge Israel as it imposes apartheid on the territories it conquered in 1967. I am also a proud and engaged Jew. This puts me in conflict with many parts of the organized Jewish Community. With this in mind, it was interesting to find myself being “astroturfed” twice in just a few days.

Last week a story about Hunter College’s School of Social Work caught my attention. It spotlighted how easy it is to claim to represent others even when this may be far from true.

A California based advocacy group, Stand With Us, had complained to the US Department of Education that Hunter, a school located in New York City,  had created a “’ pervasively hostile campus climate for Jewish students at the New York City school and its Silberman School of Social Work, in particular.”  In raising this claim, Stand With Us says it is speaking for the School’s Jewish students who have been left “with the clear impression that they are not equal members of the Silberman/Hunter campus community, and [are] therefore unable to participate fully in campus life.” Stand With Us assumes to speak for all Jewish students, and by implication, for all Jews.

Further down in the story we learn that many of those that Stand With Us claims to represent disagree. “’ As a Jewish person I’m not discriminated against,’ said senior Jennie Reich Litzky, the Hillel student president, who is not a student in the social work school…’I have felt profoundly the sense of support from the administration, who really, really understand how important this is on all levels,” said Leah Garrett, a Jewish historian and the Jewish Studies Center’s director….’I’ve never felt this kind of support from [another] administration in terms of me being a strong public voice, fighting, in every way possible, antisemitism,’ she added.” 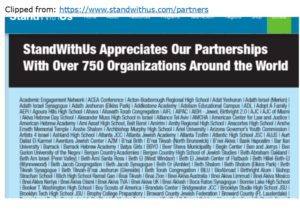 On Stand With Us’ website, it proudly notes its appreciation for over 750 organizations that are its partners. Interestingly Ben and Jerry’s is listed as one of those partners. Yet Ben and Jerry’s, because they have announced that they will no longer sell their product in occupied Palestine, is now a target of Stand With Us’ advocacy: “We support efforts to hold Ben & Jerry’s and Unilever accountable around the world, including individual U.S. states applying their anti-BDS laws by divesting their pension funds and ending any contracts they may have with these companies.” They are in the forefront of the effort to have local, state, and federal governments punish Ben and Jerry’s Parent company (Unilever) by attacking its stock price.

Is Ben and Jerry’s really a partner (I have reached out to them for their comment.) How real are the other 750 organizational partners? How often will this claim of wide and diverse support be challenged?

The same week I received notice that the results of a recent demographic study of my home community, commissioned by Chicago’s Jewish United Fund, had been made public. JUF has positioned itself as the central address of Metro Chicago’s Jewish Community. It actively works to influence public policy at the local, state, and national levels on behalf of the Chicago Jewish community. As Stand With Us functioned as the voice of the entire Hunter Jewish community, JUF Chicago positions itself as the voice of all 319,600 Jews in their community. “Over the years, the (JUF/JFMC) Government Affairs Office has had much success strengthening relationships with elected and appointed federal, state, and local officials, as well as national, state, and local coalitions and trade groups, and advocating for a variety of pressing policy and legislative issues.”

Buried in the data, almost halfway through a 248-page report, is this finding: “Among all Jewish households, 11% donated to the Jewish United Fund (JUF)/Jewish Federation of Metropolitan Chicago” It appears that an even smaller slice of their community volunteer for JUF. JUF lobbies aggressively for funding and policies it positions as reflecting the opinion of its community. So how can one do that when just 11% are supporters?

Consider another finding from the JUF Chicago study: “Nearly three-quarters of Jewish adults (73%) believe American Jews have the right to criticize the Israeli government.” But, in the name of the entire Jewish community JUF ignore this finding and proudly banners its “efforts to combat the Boycott, Divestment, and Sanctions (BDS) movement” and conflates  “anti-Semitism and hate crimes in the U.S. and around the world…” with criticism of Israel. Will any of those JUF lobbies look at this disconnection when JUF lobbyists make their case?

Claiming representation of others is more than just innocent braggadocio. As a tool easily employed by those with wealth and power, it silences those who are too often marginalized. Those voices, no matter how large support for their positions are, struggle to gain traction and recognition.

I am not sure how we impose a “truth in support” policy but it is sorely needed.