I have to admit that I find myself vacillating between being angry and being sad. I think, however, that anger is winning out and that may be a good thing. I have written before about my “history” of advocacy and much of that advocacy has focused on reproductive justice.  Well, I am tired. And while my expectations were not high when I listened to the Supreme Court hearing in Dobbs vs. Jacksons Women’s Health, the Mississippi 15-week abortion case, it was clear to me (and to all of my favorite pundits) that the Court was not going to find in favor of Reproductive Justice. And I am angry because we have no one to blame but ourselves.

We (and that is the “royal we” that encompasses a huge swath of the liberal left, the feminist world, civil rights advocates, progressives, and even those who espouse the politics of certain political parties…) have been our own worst enemies allowing disputes within our own ranks to divide us, splintering our issues, goals and power.  We have had reproductive justice movements that were led, from their beginnings by White women who often ignored and sidelined women and people of color and Indigenous and LGBTQ people, those who were most impacted by when access to reproductive health services were threatened and constricted. More often than we might think, we have formed circles and “shot at each other” rather than looked for ways to find common ground to move forward together on a unified platform. The power plays by Senators Joe Manchin and Kristyn Sinema are current examples, but their antics can be seen in the actions of other “leaders” going back over the last 50 years.

And while I would like to say that much of the anti-choice messaging and policy  has come from men who were looking for ways to control and contain women and keep them from leadership, women were also not shy about their desire to control each other. We witnessed the rise of women like Phyllis Schlafly and the Eagle Forum which grew the women’s side of the conservative movement and threw a monkey wrench into the passage of the Equal Rights Amendment. We have seen, even before that, one of the founders of Planned Parenthood, Margaret Sanger, revealed as a racist who kept Black women from joining the Suffrage Movement and believed in eugenics. And while Planned Parenthood is now taking a hard look at its very white roots, and is currently led by a Black woman, it is noteworthy to say that many, many, of those in the women’s movement’s early stages gave lip service and limited deference to women of color. And it was clear then, as it is now, that it is these women – women of color – who are the women who will be most impacted by these oppressive anti-abortion laws and court rulings.

In looking at our options and what our next steps might be as we wait for an opinion from the Supreme Court in Dobbs v. Jacksons Women’s Health, the possibilities are not plentiful nor are they likely to hold up under a conservative onslaught that is committed to ensure that any and all abortions are gone. Many   pro-abortion advocates felt that our focus should be on self-managed abortions. This is easily and safely accomplished through the use of the two step abortion pills: Mifepristone and Misoprostol. These two pills can be prescribed by a doctor via phone, telemedicine and mailed to a patient to take at home or in any place where they feel safe and comfortable.  Medication abortion is safe and effective option up to 11 weeks of a pregnancy.  The use of this option eases the strain on women to get to a clinic for a surgical abortion procedure and it can bypass some of the TRAP (Targeted Restrictions for Abortion Providers) laws that states have enacted, such as waiting periods, or mandated ultrasounds. It puts the woman in charge.  While this is not the solution for women who are pregnant beyond 10-11 weeks, it seems promising.

But wait…  The day after the Supreme Court hearing on the Mississippi case, a law that had been signed by the Governor of Texas (quickly becoming the least favorite state for one to live in if you are female) became active.  This law specified that Medication Abortion could only be used in Texas up to seven weeks of a pregnancy and that the pills cannot be delivered by mail. What this means is that while you might gain one more week on the existing 6-week Texas abortion ban, women still have to go to the doctor’s office or clinic to have the pill prescribed, and they might have to go twice since it takes two pills.  This option is no longer a full 10-11 week option, but a shorter time period in which many women may not even know they are pregnant. For women in Texas, another door has been slammed in their faces. And other state legislatures may be eagerly standing by to replicate this law.

With 22 states poised to activate trigger laws – laws that will immediately outlaw or severely restrict abortion – if the Supreme Court overturns Roe v. Wade and Casey, or even if they punt, and turn to the states to set the boundaries for abortion law, we are looking at a nation of “haves and have nots” when it comes to reproductive freedom and full bodily and medical control for women depending on which state you live in and your level of economic privilege.  The map below from the New York Times, says it all.

Where Abortion Access Would Decline if Roe v. Wade Were Overturned 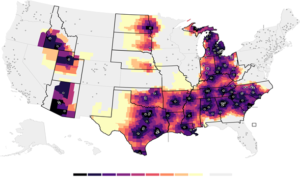 States with trigger laws and others deemed likely to ban abortion are outlined.

Estimated Decline in Legal Abortions from Most to Least (Gray indicates no decline.)

Source: Estimates by a team from Middlebury College, the University of California, San Francisco, and the Guttmacher Institute

What should be noted on this map is that the states that are outlined are those with trigger laws or those that are likely to eliminate abortion.  The filled in gray dotes are operating abortion clinics.  But the open circles are abortion clinics that are likely to close.  The message is clear.  If you are a woman in any of those 22 states that seeks an abortion after the Supreme Court decision, you will need money and time to travel to another state in order to obtain an abortion.  And money and time are not items that many of the women who most need this health care option have access to.

Writing in the New York Times, Claire Cain Miller and Margot Sanger-Katz note “In some ways, a post-Roe America would mirror the pre-Roe one. Then, abortion was generally legal in four states, and 13 more allowed abortion for health reasons. Women who could afford it would travel out of state to seek the procedure. But many women turned to coat-hangers, chemicals, unskilled abortion providers and other dangerous methods. In the early 1960s, Cook County Hospital in Chicago was treating more than 4,000 women a year for life-threatening effects of botched illegal abortions.”  This may be the future we are offering women who do not have the means and privilege to obtain a legal abortion.

But then there is still the option that Justice Amy Coney Barrett returned to again and again during the December 1st hearing – that of just dropping off your newborn at a designated Safe Haven (usually a police station or fire house) where the baby would be welcomed and taken in and quickly adopted by a loving family!  If this were such a simple solution for women, it would seem that women would take advantage of it in droves.  While every state has a Safe Haven Law, the numbers of newborns being safely left for adoption in this manner is not large which raises questions about just how simple this option is after carrying a pregnancy to term.  There is something outrageous in the simplicity of Justice Barrett’s suggestion and then in her comparison of carrying a pregnancy to term as being the same “infringement on bodily autonomy” as being forced to take a vaccine.  As Linda Greenhouse writes in the New York Times, “I’ll pass over the startling notion that being required to accept a vaccine is equivalent to being forced to carry a pregnancy to term. “Gaslighting” doesn’t adequately describe the essence of what Justice Barrett was suggesting: that the right to abortion really isn’t necessary because any woman who doesn’t want to be a mother can just hand her full-term baby over to the nearest police officer and be done with the whole business. As Justice Barrett, of all people, surely understands, such a woman will forever be exactly what she didn’t want to be: a mother, albeit one stripped of her ability to make a different choice.”

A question might be raised should even half of the newborns from women who could not obtain abortions were handed over to Safe Havens (using 2017 data that would be 430,000), would there be families waiting to adopt these children, knowing that the parents of these infants (according to the Guttmacher Institute data in 2017) were 28% Black, 25% Hispanic, 39% White, and 9% other ethnicities.  Justice Barrett may be underestimating the impact of carrying a pregnancy to term (of which she is the only member of the Court to have personal experience) on a woman, and she may also be overestimating both the desire and capacity of families to adopt these children. This entire line of questioning clearly showed her position and distracts from the issue of women controlling their own bodily health care decisions and reproductive freedom.

After looking at what is ahead for women in this nation, especially women in states where rights to abortion are limited or nonexistent, we need to be proactive now. We cannot wait until states follow the lead of Texas and put medication abortion out of reach and force women into more and more illegal acts to obtain it (which many are doing already).  The Food and Drug Administration approved its use for nonsurgical abortions in 2000, but states have placed restrictions (think Texas) on when it can be used and how it can be administered.  We need to be advocating for federal law (which would override state law) on the use and distribution of this important abortion option.  We also need to look at ways to help those women who do not have the privilege of being able to leave their state to obtain an abortion.  The National Network of Abortion Funds is a resource that can help, but more will be needed.  We will need all our creative juices flowing to come up with new ideas and new resources to uplift those who are seeking help.  And we need to listen to those Women of Color who are now in leadership in most of the major pro-choice organizations – as well they should be. Their voices at the forefront of this movement are long overdue and they truly speak for the women of this nation whose voices we most need to hear.  We should all be vigilant in listening and in standing up to say, “We won’t go back.” None of us want to see our granddaughters grow up with fewer rights than we had. Now we must stand shoulder to shoulder with them to ensure that they don’t.