When I read of Nancy Pelosi’s announcement that she would be running for reelection I found myself again reflecting on questions I had to answer more than a decade ago. When is It time to step back and hand over your job, and its power, to someone else, someone younger? How long is too long for a leader to lead?

As I neared 65, I found myself in a place I never had planned to occupy when my working career began. I was the Chief Executive 0fficer of a large nonprofit organization; the same organization I moved to Chicago to work for 4 decades earlier. In that time, over those years, I had come to understand that the power and influence that the role I occupied gave me, brought with it the ability to shape the organization, improve its ability to serve its community, and translate my vision of service into a living reality. In moments of crisis, it allowed me to protect an organization I was dedicated to and the people who worked with me.

My passion for my work and my dedication to the things I believed this organization stood for drove me on. The work was consuming. The work was rewarding in every possible way. It left me feeling valuable and valued, qualities that made all of the pressures of each day seem worth the pain they inflicted.

So, as I approached 65, the ‘normal’ age to retire, I began to contemplate what should I do. Should I keep leading since I still had things I had not yet accomplished that still seemed important to me? Set a retirement date and step away? Was it right to risk that without my unique, perhaps irreplaceable skills, knowledge, and experience my organization would be able to flourish?

If these seem like egotistical questions, ones that overstate my importance, they, in hindsight, clearly are. But in that moment, having put so much of me into my work and with an organization facing a difficult environment in which it needed to operate they seemed quite real.

My decision was it was time to step back. I realized that however uniquely qualified I thought was, and however much I thought I my institutional memory was invaluable in facing the future, I was just being self-serving.

Enough was enough. I became convinced that if I remained in place, I was just meeting my personal needs and ignoring the need for new leadership and generational change. If I failed to see this, I would be harming the organization I had devoted much of my life to. I became convinced that if it could not move forward without me, everything I had done up to this moment was a failed effort. 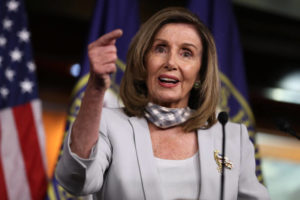 So, as I read about Nancy Pelosi’s decision, I wondered why this same logic did not apply in the world of politics and, particularly, to the Democratic Party which struggles so to lead and inspire. President Biden is 79. Speaker Pelosi is 81. Her Democratic House leadership team includes Majority Leader Steny Hoyer who is also 81 and Majority Whip James Clyburn who is 80. On the Senate side, the Democratic Party is led by Majority Leader Chuck Schumer who is 71, Senate President Pro Tem Patrick Leahy,81 and Majority Whip Dick Durbin,77. The average age for this leadership group of almost 79 years old.

Is their world of political leadership so different? Is there something irreplaceable in those who rise to power? Do they acquire skills, knowledge, and relationships that are irreplaceable? Are they correct in concluding that if they step away the causes that they have worked their lives for will be harmed?

Or are they holding on to their roles and the power that they bring just because they are too captivated by the privilege and reverence that leadership brings? Are they blind to the harm they do by not stepping away?

The issue is not that their age means that they are physically and mentally unable to handle the physical and emotional strain of their work. I know from the pace and demands of my life after retirement that old does not mean incompetent or infirm. They can do their jobs.

The issue is whether they should keep doing their jobs.

The challenge for any long-time leader is to be able to see their world without the handicap of their personal history. Experience is valuable but it brings with it a structured way of seeing the environment, internally and externally. As conditions change, the very work that leaders have done, the things that were successful and upon which their reputations are formed can become outdated and less effective. Undoing what you have built is hard and recognizing that change is necessary is even harder. But it is essential.

A new generation of leadership brings new eyes and new experiences to the task. They see their world differently. And they can more easily find new answers to old problems. The risk is that their new ways may fail. But that is no bigger risk than the chance that long-time leaders using old playbooks also may fail.

It is time for long-time leaders to step back and become respected elders. Consulted as needed, offering criticism when needed, and supporting their successors when needed. For those who have been in the front of the line, setting the course and rhythm of the effort, this may not feel as important. But it is critically important.

I know that when you step back from a job that consumes you, working for a purpose that you care about and in a position with the perks of power you have a big hole to fill in your days and in your psyche. Avoiding the struggle to refocus your time and energy and adjust to being part of history and no longer at the top of the list is no reason to stand in front of change that needs to happen.

It is time, actually it’s already long past its due date. It is time Speaker Pelosi, for you and your colleagues to step back and allow for a new generation to lead.