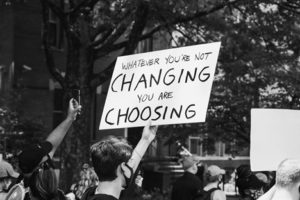 There are a lot of issues swirling about, that capture our attention, grab the headlines, dominate our conversations and, more often than not, cause us great frustration, anxiety, and despair. Headlines about the newest strain of the Covid virus – Omicron – raise questions as to whether this nation can stand together to fight this disease. We see those who are the most ill are those who refuse vaccination.  We see state and national leaders locking arms to oppose remedies that will protect their constituents from spreading as well as being infected by Omicron because they cynically claim that doing so will infringe on “individual rights.” And this is just one example among many.

Today’s so-called political leaders are embroiled in a kind of leadership that is focused on self-interest and the perpetuation of their own positions of power and control. They have been clever in raising fears among their constituents about the “consequences” of voting in those whose views are different from theirs, particularly when it comes to issues of taxation, costs, and financing government services. Their interests have little to do with the needs of those who voted them into office, but more in how to sustain their positions in government at the local, state, and national levels.  And as much as I would like to put most of the blame on the Republicans who have worked for years to get to this place, I cannot say that the Democrats are without fault and have not contributed their share to the chaos, confusion and division that makes up politics on both sides of the aisle.

It is one of the Democrat’s own, Senator Joe Manchin of West Virginia, who is the obstructionist sitting between passage and failure of President Biden’s “Build Back Better (BBB)” Act which would invest in childcare and elder care, climate change, immigration, affordable health care, affordable housing, earned income tax credits, and addresses inequity in our tax system and more.  The majority of people in this nation (66%) support this effort and much of what BBB contains.  But the Democrats cannot get one of their own to agree. Some of the environmental regulations will hurt his personal wealth and investments in the coal and fossil fuel industry of West Virginia. While not saying this directly, that is clearly one of the reasons why this wealthy, powerful Democrat will obstruct the passage of a bill that will help so many in need in his home state and in the rest of the nation. Manchin may deny this, but his other “reasons” for opposition are hard to sustain against the reports on what BBB will cost over time. .

And it seems hard to believe that all 50 Republican Senators can so easily ignore the needs of their constituents that would be well-served by this legislation.  Polls show that Americans remain steady in their support for what they see that Build Back Better will bring to them.  The numbers have remained constant between 61 and 64%. So, it seems strange that even Senators that have announced that they will not be running in 2022 or 2024 and thus do not have to fear the wrath of their party or that of Donald Trump or his followers, have not stepped forward to support what will benefit the middle and low-income people of their states. Choosing self-interest seems to be the chosen path, even when the consequences are limited. Perhaps, stepping outside the “norm” of one’s party is fraught with dangers that remain unseen to those of us who are not “insiders”.

At the state and local level, this “game” of self-interest seems to play out even more stridently. At this level, the racism, sexism, homophobia, and white nationalism can be clearly seen as new laws are passed, state districts and judicial districts are drawn and personnel who have served as nonpartisan county election officials for years are replaced by partisans who bring their biases to these positions. School boards have become highly politicized as have local library boards and almost any elected position in a community. Outside agitators and organizers are now part of groups that seemingly represent communities (i.e., parents at school board meetings). There is a lack of trust and a concern about whose words are really being spoken at a meeting or where that legislation was really written and by whom as issues move forward in communities and states.

The question that hangs over all of this, is “What is a person to do?” We can sit back and watch it as it steamrolls from one community to another, from one state to another, and as it fumbles back and forth at the national level.  As I have said before, we can pick and choose our battles and do what we can as individuals.  But I think these times call for more. I think we must be the examples that our elected officials are not. When they choose self-interest, we need to be the ones pointing the finger at them and saying, “shame”!  When they could have helped families with housing supports and chose to vote NO, we need to take pictures of (all of) their homes and ask why they get to live this way and their constituents don’t. If they oppose voting rights for people of color, we need to clearly point this out the corporations that fund their campaigns and urge people of color and others to boycott those companies that give to these candidates.

We need to start in our backyards and grow from there to our front yards, our blocks, our cities, our counties, our states, and our federal government. Right now, all of it is at risk.  All of it is in danger and we could quickly find ourselves in an untenable place. This is the time for holding people accountable… especially those who represent you. They assume you will be there, and they count on your vote.  It is not fun to have to show up in protest all the time, but it does have an impact. It is not easy to make calls and write “letters to the editor” and send emails to elected officials, but we know they keep track of the numbers of those who do.  It is not a simple thing to be present and be a “thorn in the side” of an elected official, but it is always good to be recognized. So be that “thorn” and that letter-writer, phone caller, and activist.  And be safe out there! Wear a mask, be vaccinated and social distance. Stay healthy because there never was a time when you were more needed. And know that you are not alone.