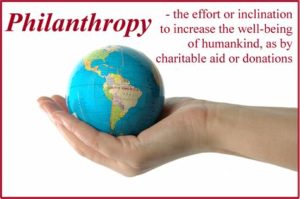 Has my criticism of philanthropy and philanthropists been wrong? This is a question I have been mulling over for the past couple of weeks.

I have questioned whether those able to give away immense sums of money are really just living the dictionary definition of philanthropy, an “effort or inclination to increase the well-being of humankind by charitable aid or donations.”  I have described the current legal and cultural structure as “a set of rules for philanthropy that allows donations, tax-deductible contributions to be made so at the direction of the donor to entities that can just warehouse the funds, giving little if any to actual service-providing organizations. It allows “donors” to “give” their money away to organizations that they continue to control, while still receiving the tax benefits of a charitable gift and while getting the accolades for being a generous philanthropist.”

I am worried that in allowing the charitable urges of the most wealthy among us to become the nation’s social safety net we are doing harm rather than good.  “If Government is kept at bay in the face of great human need, then it gives too much power to the voices of a small slice of our society.  While mega-donors like McKenzie Scott and the Walton Family share an ability to make huge donations and a desire, even with very different perspectives, to control when and how their charity is realized.  How they give reflects their personal vision and has little communal direction  They can change course as their personal tastes change and they have no ongoing responsibility to fulfill any collective commitment. They are disconnected from the work of our democratically created government.”

And I continued to urge us to support policies that limited the accumulation of great wealth and empower democratic governments to do their job as the better response. Even as new gifts of staggering size were announced I cautioned that “the larger issues of wealth, privilege, and elitism will not lose their importance…In the light of all we have been forced to see about the structural inequity we have created, we cannot look away and ignore that what structures underlie…”

So, what made me question myself?

Amidst all of the personalization and money flowing to organizations and purposes that seemed more self-serving than beneficial were stories about enlightened philanthropists. Millionaires and billionaires who seemed to agree with me and seemed to want to change the system of which I was so critical.

Melinda French Gates put her enlightened perspective in a recently published “giving pledge” update. “I recognize the absurdity of so much wealth being concentrated in the hands of one person, and I believe the only responsible thing to do with a fortune this size is give it away—as thoughtfully and impactfully as possible…Engaging in philanthropy has been one of the most rewarding experiences of my time on this planet. And 20 years into this work, I feel that my debt to life—and my debt to humanity—has only grown…The ultimate measure of my success will be whether their ability to unlock progress continues long after I’m gone.”

This was an amazing statement from the woman who, along with her former husband, Bill Gates, controls the world’s largest foundation, a foundation that has often acted with hubris and who was the largest individual philanthropist in 2021.

This message of a newly enlightened culture of philanthropy got closer to home as the details of Mackenzie Scott Bezos’s last round of large giving began to emerge. the Chronicle of Philanthropy reported  that “during the past month, 10 nonprofits have started to disclose donations they received from Scott in her latest round of giving, and they once again showed that they included “ causes that many of the ultrarich usually avoid, including organizations focused on suicide and drug addiction.”

And one of those organizations that made Ms. Scott’s list was Communities In Schools (CIS), an organization that I believe in and regularly support, was the beneficiary of a staggeringly large gift. You just have to listen to the words of CIS’s CEO, Rey Saldaña, describing the impact of this donation to CBS Morning Edition to understand how important this gift was it was. “What this allows us to do is really bring community support inside our schools to empower students to not just graduate from school but achieve in life…To think about, we have this twinkle in our eye about growing into every Title 1 school. We are in 3,000 schools today, this helps us drive and because so much pressure has come down because of the pandemic, we can now bring more staff into the schools that we’re in already. This is amazing.”

But then I remembered that even some of the very rich understand that this is a systemic problem, not a problem of individual hearts and minds. As they said in a recent letter to their fellow millionaires and billionaires gathering in Davos, Switzerland, “we know that the current tax system is not fair. Most of us can say that, while the world has gone through an immense amount of suffering in the last two years, we have actually seen our wealth rise during the pandemic – yet few if any of us can honestly say that we pay our fair share in taxes. This injustice baked into the foundation of the international tax system has created a colossal lack of trust between the people of the world and the elites who are the architects of this system. Bridging that divide is going to take more than billionaire vanity projects or piecemeal philanthropic gestures – it’s going to take a complete overhaul of a system that up until now has been deliberately designed to make the rich richer.”

Philanthropy is an individual act, and we need more than that. As much as I am thrilled by organizations I donate to being buoyed up by a large gift, this changes nothing. That I like it does not make it less a sign of personal choice, a choice that could change in the blink of the donor’s eye because something that CIS chooses to do falls out of favor with Ms. Scott.

I was reminded of how fickle donors can be when opened an issue of the Forward last week and read how a donor to a program at the University of Washington, a donor whose funding had created an otherwise successful program, had pulled his money back because his personal politics were offended. “Becky Benaroya, a prominent Seattle philanthropist, gave $5 million in 2016 to create the program. But after a professor who held the Jack and Rebecca Benaroya Endowed Chair in Israel Studies was among hundreds of Jewish studies and Israel studies professors to sign a widely circulated statement criticizing Israel last year, Benaroya…requested months of meetings with…university officials to discuss her views on the program’s direction. Those meetings…culminated in the university returning the entire endowment to Benaroya earlier this year…as a result, the university stripped [a professor] of her chair position and halted programming related to Israel studies — moves… have consequences both on campus and well beyond it.”

After some deep soul searching, I end where I started. I hope enlightened philanthropists, and I call them enlightened because I agree with their words and actions, keep saying and doing good things. Ms. Scott, Ms. Gates, and the authors of the letter to their peers gathered at Davos and I may agree on many things. But the problems they see will only be solvable if the system that allows such great wealth to be amassed is changed. Only an equitable tax system that ensures that wealth is not hoarded at the expense of our common interests can government fulfill its promise of a just and equitable society.